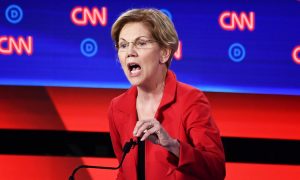 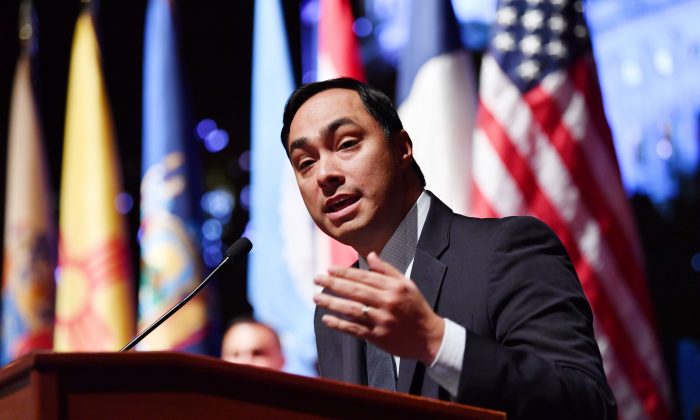 Pressure was building on Rep. Joaquin Castro (D-Texas) over a list he published online showing donors to President Donald Trump, including 11 retirees and a homemaker, as an MSNBC host confronted Castro over the list and a New York Times reporter said it was “dangerous.”

“This is dangerous, by any campaign,” Times reporter Maggie Haberman said on Twitter, responding to a post about the list. She said she did not want to retweet the donor list herself “because I don’t want to put these people’s names in my feed.”

Appearing on MSNBC on Aug. 7, a day after he sent the list out to supporters, Castro was confronted by host Willie Geist in a clip widely circulated by conservatives, including GOP Rapid Response Director Steve Guest.

“What do you say to those people this morning who said I made a campaign donation and now I’m going to be harassed, I’m going to have people protesting outside my business or perhaps even my home … what do you want from them?” Geist asked.

Castro said he didn’t intend to put anyone in danger, adding, “I don’t want anybody harassed.”

“These people are undoubtedly are already being harassed … they will be because you put their names in public.”

Give me a break Castro. pic.twitter.com/XgBw8fkevA

“But they will be because you put their names in public,” Geist told the lawmaker.

“That was not my intention,” Castro insisted.

“But that’s what will happen,” Geist responded.

Castro claimed that all the information was already public. When Geist noted the retirees and homemaker on the list, Castro responded: “I didn’t make the graphic.”

At another point, Castro said he posted the list of donors because “you’re giving money for somebody that’s going after a community and people have gotten killed because of that.”

Lawmakers and Trump campaign officials have called on Castro to delete the post, the presidential campaign of his brother, Julian Castro, to disavow posting the list, and the lawmaker to step down from office.

Texas representative refuses to delete list of Trump donors, casts himself as a victim https://t.co/xtfSAwwkVl

Castro is the chair of his brother’s campaign. Julian Castro, a cabinet secretary in the Obama administration, hasn’t commented on the situation, nor have Democratic leaders such as House Majority Leader Nancy Pelosi (D-Calif.)

White House adviser Kellyanne Conway appeared on Fox News on Aug. 7, criticizing Castro, saying it didn’t matter that the names were technically public before he sent out the list.

“It doesn’t matter that it’s public record. It matters that he’s put together some kind of target list and he’s trying to make life miserable or worse for law-abiding citizens who are expressing their First Amendment right to put their money where their politics is,” she said. “He’s a member of Congress, he has a responsibility and accountability to protect the population, not to try to make them a target.”

People should not be personally targeted for their political views. Period. This isn’t a game. It’s dangerous, and lives are at stake. I know this firsthand. https://t.co/PbxUMIOhae

House Minority Whip Steve Scalise (R-La.), who was shot by a disturbed man who said he supported Sen. Bernie Sanders (I-Vt.) in 2017, called out Castro, writing on Twitter: “People should not be personally targeted for their political views. Period. This isn’t a game. It’s dangerous, and lives are at stake. I know this firsthand.”

“If the events of this past weekend taught us anything, it’s that we need to stop seeing our neighbors as political enemies. This kind of dangerous targeting isn’t how we heal our nation,” he added.

House Minority Leader Kevin McCarthy (R-Calif.) added on Twitter: “Targeting and harassing Americans because of their political beliefs is shameful and dangerous. What happened to ‘when they go low, we go high?’ Or does that no longer matter when your brother is polling at 1 percent? Americans deserve better.”