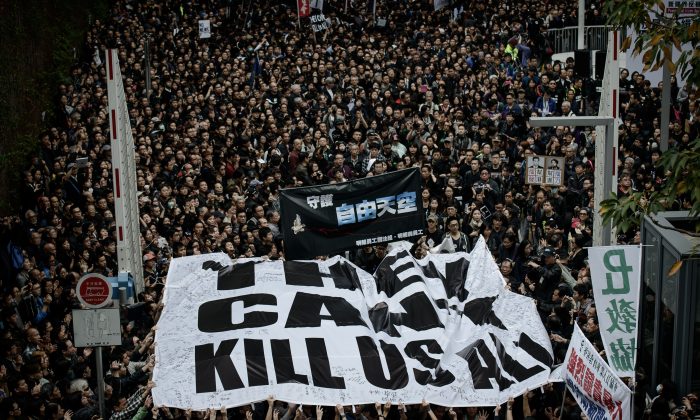 Protesters display a large banner during a rally to support press freedom in Hong Kong on March 2. The rally was staged following a violent attack on the former editor of a local liberal newspaper. (Philippe Lopez/AFP/Getty Images)
China

As political tension between Hong Kong and Beijing increases, the HKJA expects further deterioration of press freedom in the years to come.

However, other sources familiar with the situation believe that Hong Kong people’s thirst for the truth, along with the failure of the current mainstream media to do a good job, will enable fearless, independent media outlets to emerge rapidly.

The report also mentioned the Hong Kong government’s refusal to grant a broadcast license to Hong Kong Television Network (HKTV) and the withdrawal of advertisements from the Apple Daily and Am730 newspapers.

These restrictions of press freedom, coupled with continuing debate over universal suffrage for Hong Kong and the deterioration of the political environment in general, show that the Chinese Communist Party (CCP) is putting more pressure on Hong Kong.

It has been reported that the head of the CCP’s Hong Kong and Macao Affairs Office, Wang Huangya, told a high-level delegation of Hong Kong media that the media should criticize the Occupy Central movement more. Occupy Central With Love and Peace is an upcoming protest planned by Hong Kong’s pro-democracy camp to call for universal suffrage.

In addition, the Beijing State Council Information Office recently issued a white paper emphasizing that the Chinese regime has full jurisdiction over Hong Kong. This angered Hong Kongers who saw the white paper as a threat to the “one country, two systems” principle that promises Hong Kong a high level of autonomy from China.

The HKJA criticized the Hong Kong government for using one-way information channels, such as briefings and blogs, to replace the official press conference.

HKJA statistics show that from March to May this year, the Hong Kong government held three briefing meetings, published 49 blogs, and met the media to answer questions 168 times. There were only 20 official press conferences, the majority of which were about customs and police news. None were policy-related press conferences.

Mak Yin-ting, a HKJA press freedom group member, said the government’s approach has undermined press freedom. The government uses blogs to give information on important issues such as the possibility of a financial deficit for Hong Kong, Mak said.

The media has no opportunity to ask questions on these issues. Mak said this is not a responsible practice.

Mak reminded frontline reporters not to be used by these messages, especially messages from the so-called “new government inside sources.”

“I hope that we will be careful to not be used to spread rumors or even discredit others,” said Mak. “The responsibility for reporting incorrect news has been shifted to you [reporters].”

Mak used a recent incident as an example. When demonstrators protested the government’s Northeast New Territories Development Plan, a few of the protestors tried to storm the Legislative Council (LegCo).

Some government sources stated through electronic media that six social groups were involved in the LegCo incident. Later, however, the media discovered that some of the six organizations were not in operation, and some of the members’ names were incorrect.

The HKJA called on the Leung administration to fully respect media independence, take all feasible measures to stop violent attacks on journalists, and arrest the culprits and masterminds of such violent attacks.

They asked the government to reconsider granting a broadcast license to HKTV, take quick steps to develop the Free Information Act and the Archives Act, and review legal reform policies to ensure freedom of expression has been sufficiently considered.

Mak said the media’s freedom is not defeated yet because the Internet has played a supplementary role. She hopes the Annual Report will act as a warning that “the greatest responsibility is still on the government, as the government can affect the discussion environment of the entire community.”

“We will continue to monitor the government in the coming years,” Mak added.