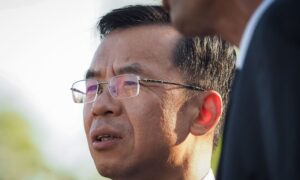 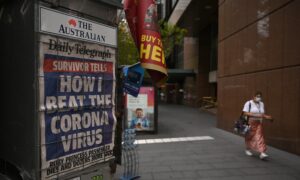 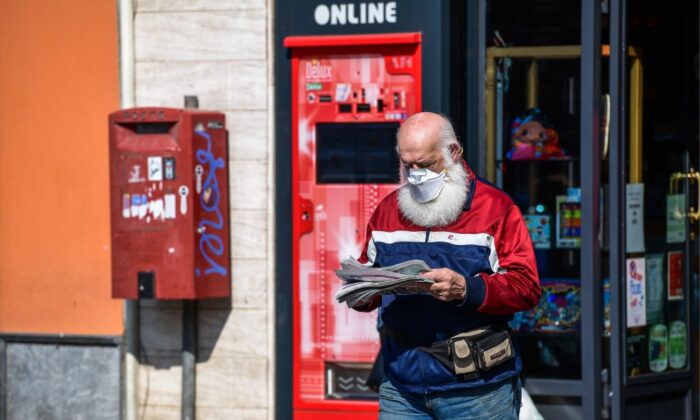 A resident wearing a face mask exits a shop after buying a newspaper in Treviolo, Italy, on April 9, 2020. (Miguel Medina/AFP via Getty Images)
Chinese Regime

Reporters Without Borders (RSF), a nonprofit that advocates for press freedom, is warning people to beware of China’s continued global disinformation campaign in connection with the CCP virus.

“On the pretext of ‘setting the record straight’ about the coronavirus, Beijing is pumping out lies and imprecisions designed to discredit journalists’ work and sow doubt about what they are reporting,” said Cédric Alviani, head of RSF’s East Asia bureau, in a statement published on April 18.

Alviani added: “It is important that the public is not taken in by the Chinese propaganda and gives preference to reporting by media outlets that respect journalistic principles.”

The statement explained that China’s disinformation campaign is designed to “drown out critics” who blame Beijing for the spread of the CCP (Chinese Communist Party) virus, commonly known as the novel coronavirus.

Media outlets have pointed to Chinese authorities’ decision to censor early warnings, such as silencing eight doctors, among them ophthalmologist Li Wenliang, for posting on Chinese social media about a new form of pneumonia in late December.

Meanwhile, Chinese citizen journalists have gone missing, including Fang Bin, for reporting on the ground in Wuhan, the epicenter of the outbreak in China.

RSF pointed to the example of Chinese officials claiming that the United States army “brought the epidemic to Wuhan.”

“[CGTN was] implying that he [Remuzzi] was saying that the coronavirus epidemic had begun in Italy a month before its appearance in China,” according to the RSF statement.

Since February, Chinese ambassadors have been attacking international media over its critical coverage of Beijing’s response to the pandemic.

Most recently, on April 14, Chinese ambassador to France, Lu Shaye, was summoned by the French foreign ministry over “posts on the embassy website and Twitter account defaming French healthcare personnel and a French parliamentary coalition,” according to RSF.

“Certain publicly voiced opinions by representatives of the Chinese embassy in France are not in line with the quality of the bilateral relation between our two countries,” French Foreign Minister Jean-Yves Le Drian said in a statement about his meeting with Lu, according to Reuters.

On April 12, the Chinese embassy in France published an article titled, “Restoring distorted facts—Observations of a Chinese diplomat posted to Paris.” The article cited an unnamed diplomat, who suggested that caretakers at nursing homes in France had abandoned their jobs, leaving residents to die of hunger and COVID-19, the disease caused by the virus.

The article was published just days after France raised its virus death toll from 8,911 to 10,328 in a single day, according to local media France 24, with a steep rise in deaths occurring at nursing homes.

“The Taiwanese authorities, supported by more than 80 French parliamentarians in a co-signed declaration, even used the word ‘negro’ to attack him. I still do not understand what could have gone through the heads of all these French elected representatives,” the article stated.

Taiwan’s Ministry of Foreign Affairs, in a statement issued on April 15, said the article, which was tweeted by the official account belonging to the Chinese embassy in France, was a false accusation.

In an article, Reuters wrote that it could not find any evidence that French lawmakers backed such a declaration, nor that Taiwanese authorities used this word to insult Tedros.

Together, Chinese ambassadors and China’s hawkish state-run newspaper Global Times have been “waging a crusade against western journalists, accusing them of ‘lying’ systematically in order to blame China for the pandemic,” according to RSF.