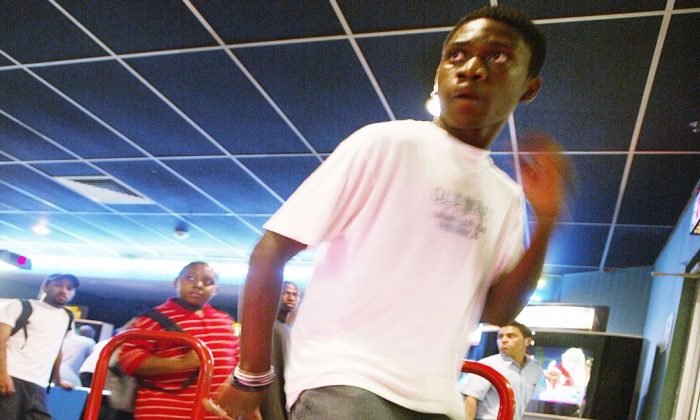 Computer games used to be the bane of parents’ lives, their children spending days and nights cloistered in an eerily glowing war zone with only young thumbs moving to save themselves. Not anymore: Interactive gaming is the new family activity, and is now so popular that the President’s Council on Fitness, Sports & Nutrition (PCFSN) has just teamed up with America’s Entertainment Software Association (ESA) to promote interactive games as a way to gain a presidential fitness award.

“This is a whole other level,” said NFL quarterback Drew Brees at the launch of the initiative in the Smithsonian American Art Museum in Washington, D.C., on Tuesday, May 1.

“The whole interactive gaming thing is phenomenal, because it is so different from what you think is just your traditional sit-behind-a-computer playing computer games or just sitting there with remote control.” Brees told The Epoch Times. “Now you’re actually getting up, you’re having to dance, you’re having to swing an imaginary rocket right, swing a golf club, throw a ball, so you can start breaking a sweat really quickly.”

The award-winning quarterback for the New Orleans Saints is also co-chair for the President’s Council on Fitness, Sports & Nutrition. His participation was welcomed by U.S. Department of Health and Human Services Secretary Kathleen Sebelius, who joked at the event about how lucky she was to have had the handsome Brees’s arm around her for a photo shoot. Secretary Sebelius became serious, however, when she talked about America’s health problems.

“Way too many Americans suffer from conditions and illnesses that could be prevented through a healthy lifestyle,” she said. “A quarter of children now have chronic conditions—asthma, diabetes—that can challenge their success, both inside and outside the classroom.”

In an effort to encourage healthier living, the President’s Council on Fitness, Sports & Nutrition teamed up with First Lady Michelle Obama’s ‘Let’s Move Campaign’ last year and launched a challenge to get 1 million Americans to sign up for the Presidential Active Lifestyle Award (PALA+). Participants, both children and adults, must “get moving” for 30 to 60 minutes a day, 5 days a week, for 6 weeks, in order to earn the award.

Participants in the PALA+ initiative exceeded 1 million, up from last year’s 700,000. The new interactive gaming initiative will see the industry promote the PALA+ awards plus the fitness aspects of the games, while adding a new dimension to exercise.

After witnessing the enthusiasm with which school kids embraced the games during a demonstration at a D.C. school earlier in the day, Sebelius said the games could help the many schools that were short on recreational areas and space for exercise.

“These are actually exercise routines that can be done in very small classrooms and can be done by kids to give them a really good workout,” she said.

The games could also be a family affair. “Kids and families are going to be able track their active game play to meet their PALA+ quotas,” Sebelius said.

Michael Gallagher, president and chief executive of the Entertainment Software Association (ESA), said the potential for family involvement had been integral to the presidential relationship.

Not only was the equipment easy to use and relatively inexpensive, but the ability to track progress had also been an important aspect of the presidential program. “So there is a measurement process that puts in the integrity you need for a President’s Council partnership,” Gallagher said.

Gaming companies are not only receptive to the needs and interests of consumers, they are also able to respond quickly to trends. There were 7 top titles on display but at least 20 others in the market, Gallagher said adding, “This is a high-growth category, so you’ll see more and more.”

The fact that attendees entered the ESA event by passing through an exhibit called “The Art of Video Games,” which is hosted by the Smithsonian American Art Museum, further highlights the impact electronic art is having on the greater community.

Among the members of the President’s Council on Fitness attending the event were former tennis champion, Billie Jean King, and Olympic figure-skating gold medalist, Michelle Kwan.

“Whatever works to get people moving,” Billie Jean King said.

A flag bearer for America at the opening of the London Summer Olympics, Kwan said she thought the games were a fun way to get fit, but hadn’t picked up any new dance moves.

“I love to dance, I have always been a dancer, so there are no steps that are new. I think it is fun because it is like a choreographed program. If you have four players, you can do it like that. It can be a competitive thing, but also funny if that person can’t dance and you watch them, that is fun,” she said having a chuckle at some of the antics on display.

Drew Brees, father to two young boys, said he was looking forward to spending some family time with the games. As for any links to the NFL, he says he does not know of any NFL games in the pipeline, but he would be keen to help out if there were.

“I would love to be asked,” he said. “I hope that happens in the future, for sure.”