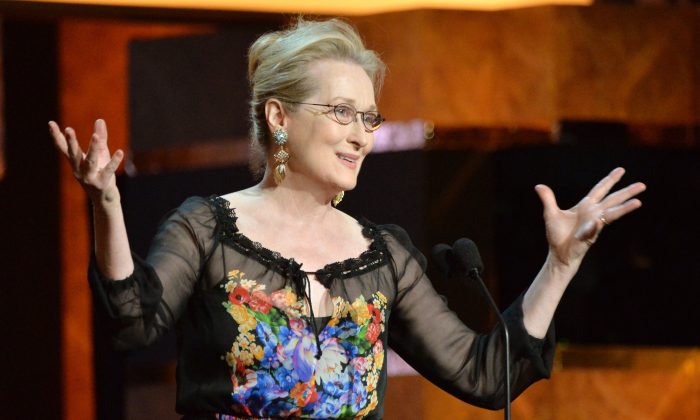 Actress Meryl Streep speaks onstage at the 2014 AFI Life Achievement Award: A Tribute to Jane Fonda at the Dolby Theatre on June 5, 2014 in Hollywood, California. (Photo by Frazer Harrison/Getty Images for AFI)
US

The Medal of Freedom recipients were honored at a White House ceremony, and President Barack Obama personally bestowed the awards.

Other living recipients of the 2014 Medal of Freedom include:

Of the 19 medals awarded, six were given out posthumously. The trio of James Chaney, Andrew Goodman, and Michael Schwerner will be awarded the medal for their work in promoting voting rights in Mississippi the 1960’s. All three were assassinated by the Ku Klux Klan in 1964. Their story was dramatized in the 1988 film Mississippi Burning.

Others who were awarded posthumously include:

Awards are given to exemplary Americans “who have made especially meritorious contributions to the security or national interests of the United States, to world peace, or to cultural or other significant public or private endeavors,” the White House said.

The Presidential Medal of Freedom was first awarded in 1963. Three people, including Colin Powell, have been awarded twice.