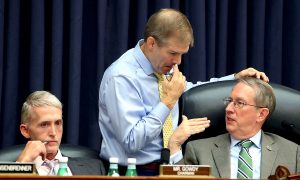 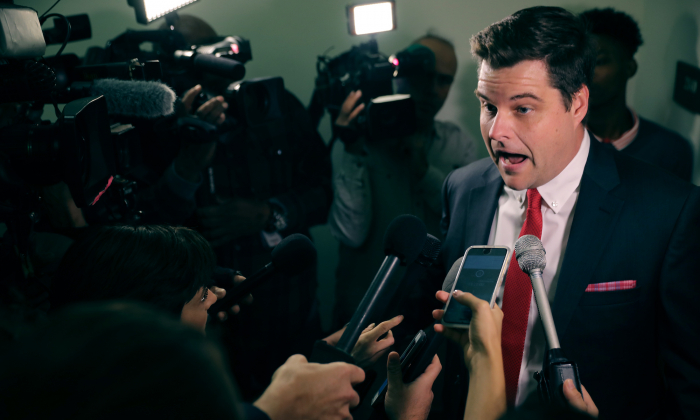 NEW YORK—Republican lawmakers scorched their Democratic counterparts for launching new investigations into President Donald Trump, saying the probes are overly broad, lack the necessary evidence, and are meant to harass the commander in chief.

The Republicans levied their criticism on the heels of a large-scale document request by House Judiciary Committee Chairman Jerrold Nadler (D-N.Y.). The Democrat-led committee contacted 81 people and entities as part of a newly launched investigation into whether Trump obstructed justice and abused power. The list includes the president’s family members, businesses, and former attorney, among others.

“Presidential harassment is real,” Rep. Matt Gaetz (R-Fla.) said on Twitter. “We should be focusing on running the country, not playing the Democrats’ political games against the duly elected President of the United States.”

We should be focusing on running the country, not playing the Democrats' political games against the duly elected President of the United States. @cnsnews https://t.co/n8kydCepxW

Nadler launched the committee investigation as expectations heightened for an imminent release of the final report by special counsel Robert Mueller. Two major publishers are already pre-selling books that will feature a full copy of the report, with a placeholder release date of March 26.

Mueller has investigated allegations of collusion between the Trump campaign and Russia, and whether the president obstructed justice, since May 2017. The special counsel hasn’t charged any U.S. citizen with collusion and isn’t expected to fault Trump for obstruction.

Meanwhile, inquiries by both the House and Senate intelligence committees have concluded that there is no evidence of collusion between the Trump campaign and Russia. As a result, the Republicans view the new investigations by House Democrats as fishing expeditions meant to hamstring Trump and his allies ahead of the 2020 election.

The House Intelligence Committee is running a parallel investigation, looking into the same set of crimes long-scrutinized by Mueller. The committee held its first hearing with convicted liar and felon Michael Cohen on the same day as Trump’s second meeting with North Korean leader Kim Jong Un in Vietnam for denuclearization talks. Cohen testified that he had no evidence that the Trump campaign colluded with Russia.

They couldn’t even wait a week.

So today they launched an 81-letter fishing expedition.

Republicans ran investigations concurrent to the special counsel probe that found no evidence of collusion by the Trump campaign, while simultaneously uncovering a large-scale, potentially illegal operation funded by the Clinton campaign.

Congressional investigators found that the Clinton campaign paid for an opposition research dossier on Trump, which was prepared by a former foreign spy who paid sources with ties to the Kremlin for information. The FBI and Obama-era Justice Department (DOJ) used the dossier to obtain a warrant from a secret court to spy on the Trump campaign. Top FBI and DOJ officials signed off on the warrant application, even though it failed to mention to the court that the Clinton campaign funded the dossier and that the foreign spy who compiled the document abhorred Trump, among a battery of other issues.

“On the eve of the special counsel’s report, the Democrats’ ‘Russian collusion’ narrative is fading for one reason: because there was no collusion,” Rep. Mark Meadows (R-N.C.) wrote on Twitter. “It was a political conspiracy theory. To say the case ‘fell apart’ would be kind—because there never was a case from the beginning.”

On the eve of the special counsel's report, the Democrats' 'Russian collusion' narrative is fading for one reason: because there was no collusion. It was a political conspiracy theory. To say the case "fell apart" would be kind—because there never was a case from the beginning.

“Two years, millions of dollars spent, and zero evidence of collusion—but that apparently won’t stop Adam Schiff and Democrat investigators,” Meadows added. “This is a conspiracy machine desperately in search of a crime.”

Trump has always denied all allegations of collusion and obstruction, calling the special counsel probe a “hoax” and a “witch hunt.” The president, nonetheless, complied with Mueller’s investigators and said he will do the same with requests from House Democrats.

The White House issued a scalding rebuke after Nadler released the investigation, calling it “disgraceful and abusive.”

“Democrats are harassing the president to distract from their radical agenda of making America a socialist country, killing babies after they’re born, and pushing a ‘green new deal’ that would destroy jobs and bankrupt America,” White House press secretary Sara Sanders said in a statement.

“The Democrats are more interested in pathetic political games and catering to a radical, leftist base than producing results for our citizens.

“The Democrats are not after truth, they are after the president.”

In an interview aired March 3, Nadler said that he expects quick compliance with the initial round of requests because the committee asked for documents each person has already provided to the special counsel and Congress. The chairman admitted he doesn’t have enough evidence of obstruction and that it’s his personal opinion that the president broke the law.

“We don’t have the facts yet,” Nadler told CNN. “But we’re going to initiate proper investigations.”