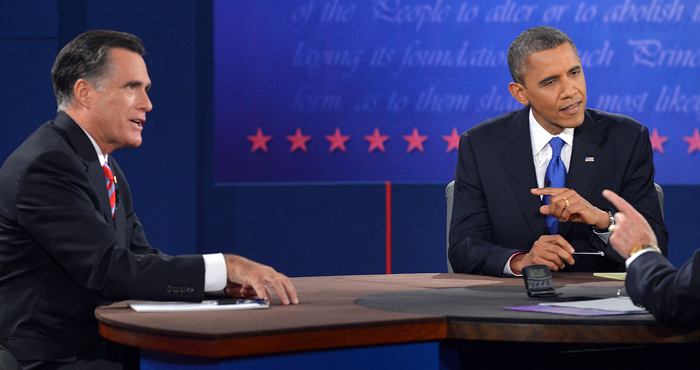 U.S. President Barack Obama (2nd-R) and Republican presidential candidate Mitt Romney participate in the third and final presidential debate at Lynn University in Boca Raton, Fla., on Oct. 22. Their debate performances were remarkable for how little time they spent on China and for not mentioning at all the atrocities taking place there. (JEWEL SAMAD/AFP/Getty Images)
Opinion

In the presidential foreign policy debate Monday, the candidates spent approximately eight minutes talking about China. How could they barely scratch the surface of the big issues with the world’s most populous nation, the second-largest trading partner of the United States, the growing Asian power that is tenaciously trying to win friends and influence people in every corner of the globe?

What were they sidestepping? Were they wary of offending someone? Perhaps a guilty conscience? Were they dodging mentioning the deadly ways of the rulers of China, things that they know should be spoken about?

As The Epoch Times has reported from many angles, the ruling regime of China is the world’s long-term, leading violator of human rights. But the abstract, academic term “violators of human rights” does not begin to tell the chilling story. In its history, the Chinese Communist Party is responsible for some 80 million unnatural deaths of innocent Chinese people.

But more recently, the CCP has instigated a systematic, profit-making program of harvesting organs from tens of thousands of living Falun Gong practitioners since 2000. Human rights lawyer David Matas has referred to this as a “new form of evil on this planet.”

You may have heard about fallen CCP star Bo Xilai and his wife, Gu Kailai, recently convicted of murdering British businessman Neil Heywood. As reported elsewhere, Bo and his gang-within-the-gang are involved in an epic internal CCP struggle for power as the CCP People’s Congress approaches in November. The CCP would like you to believe that the struggle is hard-liners versus reformists, or that it is about corruption of Bo and his associates.

What the CCP does not want you to know is that the rumblings coming from China are actually over this historic, unprecedented crime of removing the organs of innocent people while they are still breathing, and then selling them to be transplanted. As the story comes out, Bo and his wife Gu were key figures in organizing the organ removal and trade. But who else, in higher positions than they were, is involved?

If the candidates each speak out now about one of the most astounding mass atrocities taking place in the world today, they will do well for themselves, the United States, and China.

By speaking out now, the candidates will make clear to the American people that they are willing to tie their electoral fortunes to the proposition that human rights matter. In doing so, they will say that some issues transcend mere politics. They will make a statement that they will be principled in how they will conduct themselves in office.

They will also give a new direction to U.S. foreign policy regarding what is now the single most important bilateral relation for the United States—that with China. U.S. policy has been based on an attempt to get rich trading with China. The United States conferred the status of Permanent Normal Trade Relations on China in 2000 in the expectation that we would profit from trade with China and the Chinese people would benefit, with their country moving toward democracy.

Both sides of the calculation have failed badly. With the People’s Republic of China manipulating its currency, subsidizing industries, restricting access to its market, and stealing intellectual property of American companies, the United States has lost out badly in the deal. At the same time, repression in China has become more severe.

The simple statement that the atrocity of organ harvesting cannot be allowed to continue would declare to all the world that the United States does not condone crimes against humanity. That would give our foreign policy toward China a baseline of principle that would direct this relationship in a new, healthier direction.

If the candidates speak out opposing the atrocity of organ harvesting, they will also benefit the Chinese people. China is at a crossroads. The Chinese Communist Party is failing and the question all ask is what will come after the Party.

By condemning organ harvesting, the candidates will strengthen the hands of those in the CCP who would like to move their country in the direction of democracy and the rule of law.

Of course, here in the United States, we get the candidates we deserve. We, too, have to take a hand.

If you see President Barak Obama or Mitt Romney before Election Day, ask them, “Is it true? Is the Chinese Communist Party responsible for harvesting organs from tens of thousands of living Falun Gong practitioners? And what will you do about it?”