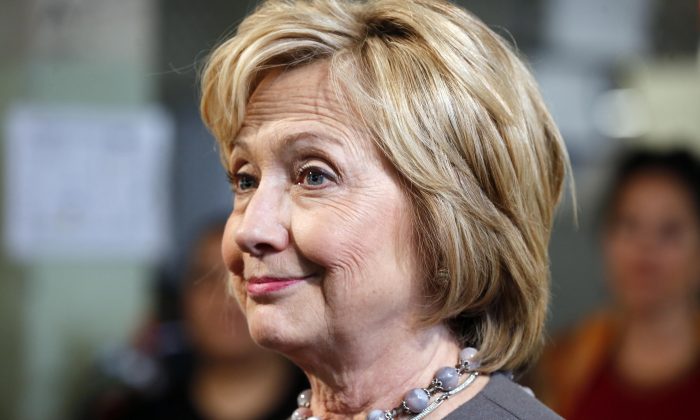 Democratic presidential candidate Hillary Clinton was put on the spot at a campaign stop this week.

In Hooksett, New Hampshire on December 3, Clinton fielded a question from a woman who asked: “Secretary Clinton, you recently came out to say that all rape victims should be believed. But would you say that Juanita Broaddrick, Kathleen Willey and Paula Jones be believed as well?”

Clinton curtly responded: “Well, I would say that everyone should be believed at first until they are disbelieved based on evidence.”

Broaddrick said in 1999 on “Dateline” that Bill Clinton raped her two decades earlier, when he was running for governor of Arkansas.

Willey, a Democratic activist and White House volunteer, said in 1993 that Bill Clinton grabbed and kissed her in the Oval Office’s private study.

Jones, a former Arkansas state worker, sued Bill Clinton for sexual harassment, saying he propositioned her for sex and exposed himself in a hotel room in 1991.

Hillary Clinton’s short response was the first time she’s commented on the accusations against her husband. The crowd at the campaign stop applauded her answer.

“You recently came out to say that all rape victims should be believed. But would you say that about Juanita Broaddrick, Kathleen Willey, and or Paula Jones. Should we believe them as well?” Hillary Clinton was asked at a New Hampshire town hall. READ: http://bit.ly/1QitvYb

But some others weren’t pleased with the answer, saying it seemed to lay the blame on the alleged victims.

“I don’t know about you, but that sounds a lot like blaming the victim. Will Hillary get a pass on this because she’s a Democrat and a woman?” said one Facebook user.

“This answer does not satisfy most Americans old enough to remember that this was three but not all that claimed Hillary protected Bill from abuse of women,” added another.

The Democratic candidate has laid out a proposal to curb sexual assault on college campuses as part of her campaign.