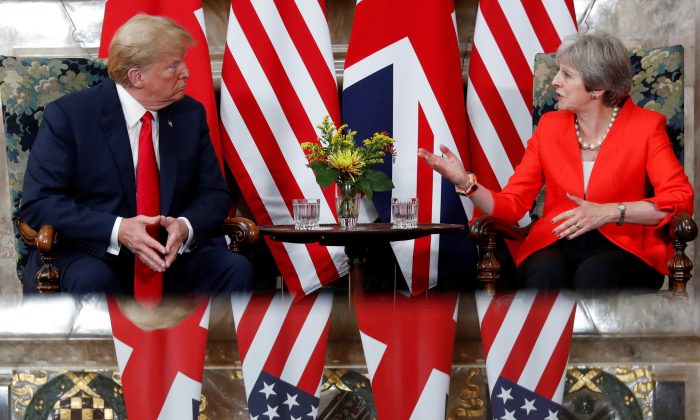 It’s been a whirlwind trip for U.S. President Donald Trump, who touched down in the UK on July 12—his first visit to the country since being elected as president.

He played a final round of golf at his Turnberry course on Sunday, July 15, before setting off to meet Russian President Vladimir Putin in Helsinki.

During his UK trip, he’s had tea with the Queen, held talks with British Prime Minister Theresa May, and had a bombshell interview with the British tabloid, The Sun.

At a press conference with May at her country residence, Chequers, the president said he looked forward to finalizing a free trade deal with the UK.

He also described the relationship between the UK and the U.S. as “the highest level of special.”

It was a bombshell interview by political editor of The Sun, Tom Newton Dunn, in which Trump criticised May’s Brexit strategy and also said that Boris Johnson would make a great prime minister.

At the press conference, however, Trump called it “fake news,” saying that the report omitted the positive things he said about May.

May appeared to not take Trump’s critical comments in the report to heart, apparently remarking, “Don’t worry, it’s only the press” to the president.

The President and First Lady were welcomed to Blenheim Palace by a marching band made up of the Scots, Irish, and Welsh Guards.

He was shown around an exhibition of Winston Churchill, who was born at Blenheim Palace. The following day, at Chequers, Trump was photographed in the chair that belonged to the former wartime leader.

.@POTUS sits in Winston Churchill’s chair as a guest of Prime Minister May at Chequers. pic.twitter.com/Wv2nrLMnQP

The president and First Lady were joined by 150 specially invited guests and business leaders for a black-tie dinner at Blenheim Palace. He enjoyed smoked Scottish salmon for starters, Hereford beef fillet with potatoes for the main course, and a pudding of strawberries with clotted cream.

Welcoming the president amid the protests

The Trumps traveled around the UK by helicopter, bypassing traffic—and the protests.

While the protests against Trump, mainly organised by leftist organisations, took place in London, others wanted to give the president a warm welcome in the UK.

On the day that Trump touched down in the country, British Member of Parliament Daniel Kawczynski hosted a welcome event in the British parliament.

“There are a lot of manifestations against the president’s visit,” Kawczynski said. “We wanted to give a different interpretation of the visit, both to visiting Americans but also to our own media.”

And a pub in west London, called The Jameson, has re-named itself “The Trump Arms” to celebrate the American president’s visit.

There was also a rally on Saturday in London by Trump supporters and right-wing activists who wanted to show their support of Trump.

Sarah B. Elliot, Chairwoman of Republicans Overseas UK said many British Trump supporters are shy to express themselves.

“I get messages all the time from people who support the president, support President Trump, but they don’t feel like they can say it openly especially in an urban environment or a big city,” she said.

Tea With the Queen

Trump and the First Lady had tea with the British monarch on Friday at Windsor Castle. The Queen, now 92, had met 11 U.S. presidents before meeting Trump.