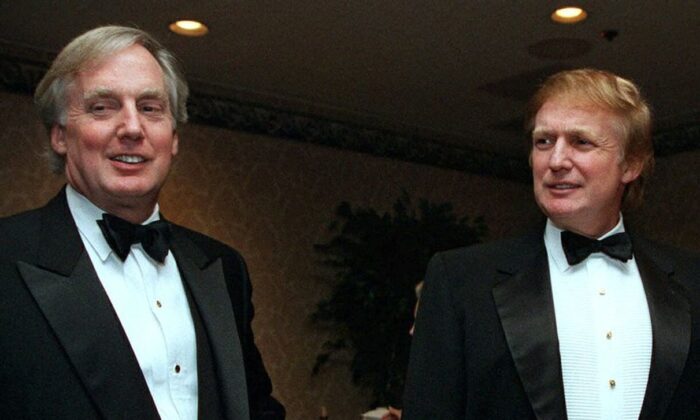 In this Nov. 3, 1999 file photo, Robert Trump (L), joins real estate developer and presidential hopeful Donald Trump at an event in New York. A tell-all book by President Donald Trump's niece cannot be published until a judge decides the merits of claims by the president's brother, her uncle Robert Trump, that its publication would violate a pact among family members, a judge said on June 30, 2020. (AP Photo/Diane Bonadreff)
US News

Robert Trump, the brother of President Donald Trump, is hospitalized in New York, said the White House on Friday.

Trump administration spokesman Judd Deere said that he “can confirm the report that the President’s brother is hospitalized,” according to CNN.

ABC News first reported on the development, citing sources that he is “very ill,” although Deere did not confirm the report.

Trump was already slated to visit his property in Bedminster, New Jersey, on Friday, according to The Associated Press.

Robert Trump previously worked with his older brother at the Trump Organization.

Earlier this year, he filed a lawsuit on behalf of the Trump family to stop the publication of a tell-all book by the president’s niece, Mary Trump, titled “Too Much and Never Enough.”

The family stated that her book violated a nondisclosure agreement that she had signed in connection to the money she received from the Trump family. She’s the daughter of Fred Trump Jr., who died in 1981.

“Now that the unconstitutional gag order has finally been lifted, we are sure the White House and America are looking forward to finally hearing what Mary has to say,” Chris Bastardi, a spokesperson for Mary Trump, said in a statement at the time.

But the White House denied the contents of the book, saying it’s fantasy.

“It’s a book of falsehoods, and that‘s about it,“ White House press secretary Kayleigh McEnany told reporters in July. “It‘s ridiculous, absurd allegations that have absolutely no bearing in truth.“

“Her attempt to sensationalize and mischaracterize our family relationship after all of these years for her own financial gain is both a travesty and injustice to the memory of my late brother, Fred and our beloved parents,” Robert Trump also told the New York Times in June about the book. “I and the rest of my entire family are so proud of my wonderful brother, the president, and feel that Mary’s actions are truly a disgrace.”

The White House has not immediately responded to a request for comment about Trump’s hospitalization.