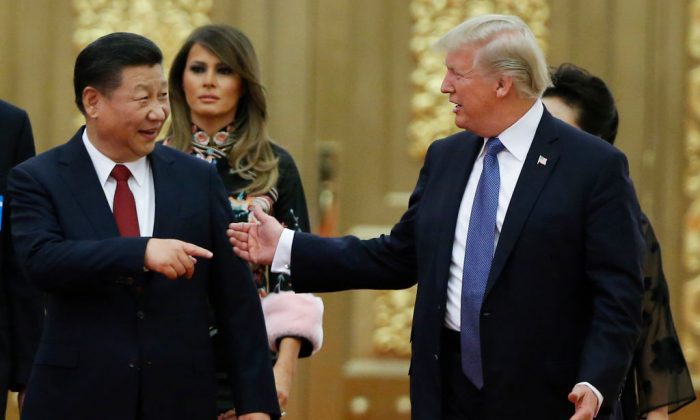 U.S. President Donald Trump and Chinese leader Xi Jinping arrive at a state dinner at the Great Hall of the People in Beijing on Nov. 9, 2017. (Thomas Peter-Pool/Getty Images)
US-China Relations

U.S. President Donald Trump warned Beijing that any violent crackdown in Hong Kong on protesters would harm the ongoing trade talks between the two countries.

“I think it’d be very hard to deal if they [China] do violence, I mean, if it’s another Tiananmen Square,” Trump told reporters in New Jersey on Aug. 18. He added that he supported liberty and democracy in Hong Kong.

In Hong Kong, protests are now in the 11th week, as Hongkongers continue to demand that the city government withdraw its suspended extradition bill, which they fear threatens the city’s judicial independence, since anyone in Hong Kong could be transferred for trial in China’s ‘rule by law’ system if accused of criminal activity.

The initial call for scrapping the bill has now ballooned into other demands, such as a call for universal suffrage, as well as an independent investigation looking into police actions and violence in dealing with protesters.

Most recently on Aug. 18, more than 1.7 million Hongkongers walked the streets of Hong Kong in heavy rain, defying a police ban, to continue calling on the government to engage with their demands.

Beijing has resorted to rhetoric to criticize the protesters, labelling them as radicals. On Aug. 12, Beijing referred to the protests as “budding terrorism.” Some observers, including Human Rights Watch, have said that such language could indicate that Beijing could deploy its forces into Hong Kong in the name of anti-terrorism, as was done in Xinjiang against ethnic minorities like the Uyghurs in 2011.

The possibility of a violent Chinese crackdown has heightened in recent weeks as armed Chinese police in Shenzhen, bordering Hong Kong, were photographed holding three different drills this month.

The most recent one was Aug. 17, when China’s state-run media Global Times published a minute-long video on its social media Weibo account. In the video, Chinese police officers shouted: “Stop violence, repent, and be saved,” and deployed armored vehicles, tear gas, and water cannons against lookalike protesters.

“I’d like to see Hong Kong worked out in a very humanitarian fashion,” Trump said. “I hope President Xi can do it. He sure has the ability, I can tell you that, from personal knowledge.” The president added that such a humanitarian conclusion would be “very good for the trade deal.”

This is not the first time that Trump has tied the situation in Hong Kong with the trade talks.

In a Twitter post on Aug. 14, Trump wrote: “Of course, China wants to make a deal. Let them work humanely with Hong Kong first!”

On Aug. 1, Trump announced new tariffs of 10 percent to be imposed in September on $300 billion worth of Chinese imports, including smartwatches, smart speakers, and Bluetooth headphones.

The 10 percent tariffs on some of the $300 billion Chinese goods, including cellphones and laptops, were then postponed on Aug. 13 until mid-December.