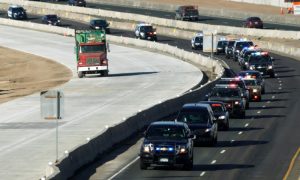 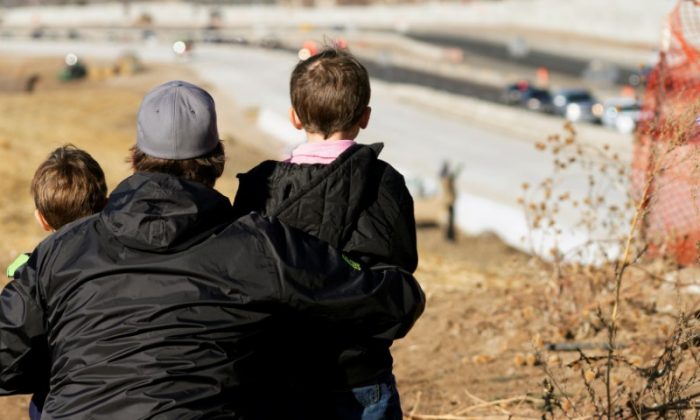 A man and two young boys watch a procession of police vehicles escort the hearse carrying the body of a deputy killed in a domestic disturbance where multiple deputies and civilians were shot in Highlands Ranch, Colorado, on Dec. 31, 2017. (REUTERS/Rick Wilking)
US News

President Donald Trump sent his condolences to the victims of the shooting in Colorado on Sunday morning.

At least one deputy died and four others were injured in the incident near Denver, according to the Douglas County Sheriff’s Office.

A suspect opened fire on deputies responding to a domestic disturbance, according to the office.

My deepest condolences to the victims of the terrible shooting in Douglas County @DCSheriff, and their families. We love our police and law enforcement – God Bless them all! #LESM

“My deepest condolences to the victims of the terrible shooting in Douglas County @DCSheriff, and their families. We love our police and law enforcement – God Bless them all! #LESM,” Trump tweeted.

Douglas County Sheriff Joe Pelle’s son, Jeff, was among those who were injured in the incident. The sheriff said that his son “in good spirits considering the gravity and severity of what occurred earlier this morning.”

Statement from Sheriff Pelle (Part 1 of 4):

“Earlier this morning, our son, Douglas County sheriff’s deputy, Jeff Pelle, was shot during the Copper Canyon shooting. Jeff underwent surgery as a result of his injuries, and is recovering. #CopperCanyonOIS

The deputies responded to a call of shots fired at the Copper Canyon Apartment Homes in Douglas County, about 16 miles south of Denver, around 6 a.m. local time, said Jason Blanchard, a spokesman for the sheriff’s office, Reuters reported.

Littleton Adventist Hospital was treating three victims, according to Alyssa Parker, a hospital spokeswoman, who declined to describe their conditions.

One unidentified deputy sheriff was pronounced dead at the hospital, where other law enforcement soon after formed a large memorial procession heading to the county coroner’s office.

The suspect was also not identified.

.@FBIDenver has been monitoring the events that occurred this morning and have offered our full support to @dcsheriff. Our thoughts and prayers are with our law enforcement partners and all those impacted by today’s senseless act of violence.

Earlier in the day, the sheriff’s office said that “citizens in the affected area are instructed to shelter in place, avoid windows and stay away from exterior walls.”