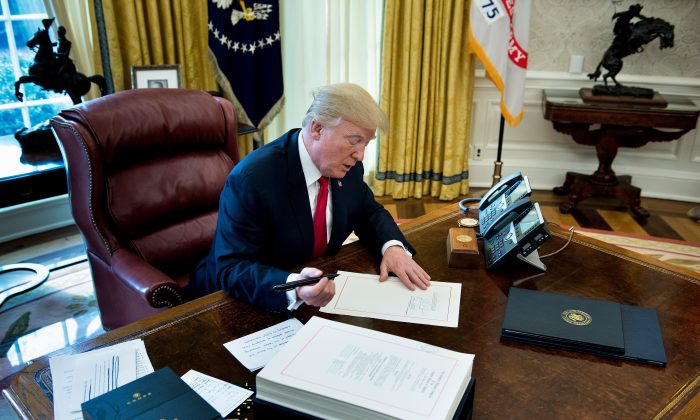 President Donald Trump signs the Tax Cut and Reform Bill in the Oval Office at the White House in Washington, on Dec. 22, 2017. (Brendan Smialowski/AFP/Getty Images)
Politics

“This is the biggest tax cuts and reform in the history of our country. This is bigger than, actually, President Reagan’s many years ago,” Trump said at the White House on Dec. 22.

For the signing of the bill, Trump said he was planning to wait until a big, formal ceremony in early January. But after watching the morning news, he said he changed his mind.

“Every one of the networks was saying, ‘Will he keep his promise? Will he sign it before Christmas?’ And so I immediately called, I said, let’s get it ready.”

The bill will provide $3.2 trillion in tax cuts for American families, including doubling the standard deduction and doubling the child tax credit, Trump said.

The reduction in the corporate tax rate will restore the nation’s competitive edge and level the playing field for U.S. companies, according to Republicans and many economists.

Trump thanked companies that welcomed tax reform including AT&T, Boeing, Sinclair, Wells Fargo, and Comcast. AT&T was the first company that announced it would invest an additional $1 billion in the United States next year and pay a special $1,000 bonus to more than 200,000 employees during the holiday.

According to the new plan, companies will be able to deduct 100 percent of the cost of their capital investments in the year the investment is made. This provision, which will phase out in five years, is expected to boost business investments in the short term.

“I think, it is going to be one of the biggest things in the bill, frankly. I think people are going to go out and absolutely go wild over expensing,” Trump said.

Congress voted in favor of the sweeping tax plan on Dec. 20, paving the way for the biggest rewrite of the U.S. tax code in three decades.

Republicans believe tax reform is a once-in-a-generation opportunity that will overhaul a complex, costly, and unfair U.S. tax system that caters to special interests.

They blame the existing tax code for chasing American companies and jobs overseas. Hence, they argue the new bill will encourage more investment and job creation.

Cutting the corporate tax rate and attracting trillions of dollars of U.S. cash parked overseas will conservatively boost the median wage by $4,000 a year, according to Kevin Hassett, chairman of the Council of Economic Advisers.

For small businesses with income above $315,000, the bill generally provides a deduction for up to 20 percent on business profits. The provision reduces the effective marginal tax rate to no more than 29.6 percent. Under the existing tax code, pass-throughs are taxed at 39.6 percent.

What Tax Cuts Mean For Individuals

The new plan narrows itemized deductions to simplify the tax code. However, it nearly doubles the standard deduction for individuals from $6,350 to $12,000 and for married couples filing jointly from $12,700 to $24,000.

According to Republican leaders, this provision will simplify tax filing and enable nine out of 10 people to fill their taxes on a form so simple it could fit on a postcard. This coming April 15 will be the last time Americans will file their taxes under the existing tax code.

The plan also narrows the deduction for state and local taxes (SALT) by capping it at $10,000. It allows taxpayers the option to choose among sales, income, and property taxes. Those who benefit most from the SALT deductions are taxpayers in high-tax states like New York, New Jersey, and California.

In addition, the bill allows the deduction of mortgage interest for newly purchased homes (first or second home) up to $750,000, which is below the current $1 million cap. It also repeals Obamacare’s individual mandate provision, which requires most Americans to have a basic level of health insurance coverage or else pay a tax penalty.