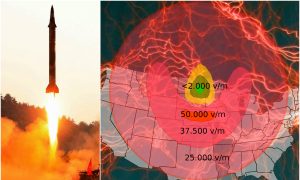 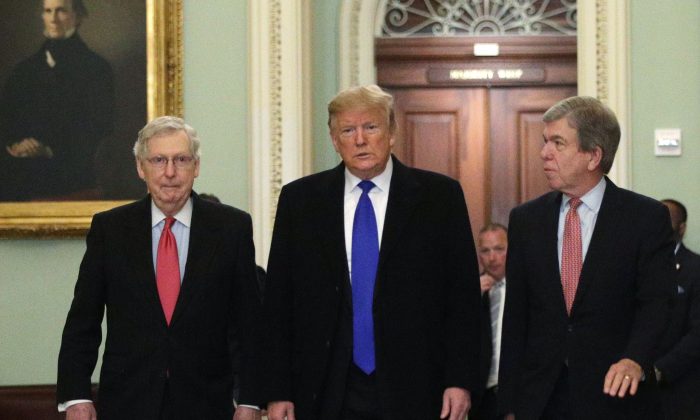 Experts from the congressional EMP Commission have long called for such action, warning that an EMP could break America’s electrical grid and result in the eventual deaths of 90 percent of the U.S. population. Such an EMP could occur either from a natural solar storm, or, if an adversary detonated a nuclear bomb high above the United States.

Peter Pry, who has worked with the EMP Commission and has been a driving force to get America protected from an EMP, commented, “It is a good, strong executive order. A good first step toward achieving national EMP preparedness.”

Currently, Kirstjen Nielsen is the secretary of Homeland Security, and she will report to John Bolton to implement this executive order.

Previously, the government has hardened military equipment against an EMP. Trump’s order is a call to protect all U.S. citizens, by hardening civilian infrastructure. It defines critical infrastructure to include items that, if incapacitated, would have a “debilitating impact” on “national public health or safety.”

Potential items that may be flagged for hardening, which the EMP Commission has warned about, may include, among other items, extra high voltage transformers, and nuclear power plants.

Extra high voltage transformers may be a priority because America’s electric grid requires them, they are vulnerable to EMP, and they are extraordinarily difficult to replace. America has limited ability to manufacture these, as much of that capability has moved abroad. They are difficult to make and cannot be mass produced. They are so massive that even transporting them to their destination is a challenge.

Nuclear power plants present the risk that they could potentially stop operating properly following an EMP, and spew radiation everywhere, in a situation where Americans would be least equipped to deal with it.

There are a number of periodic reports to evaluate progress on EMP preparedness which will be submitted to Trump and Bolton. For instance, within one year of the order, and on a recurring two-year basis thereafter, the president will get a report generated by the secretaries of Homeland Security, Defense, and Energy, analyzing different options available to improve the resilience of critical infrastructure to EMP.

It also tells the Department of Defense to focus on ways to deter an EMP attack from happening and to include the possibility of an EMP attack in defense planning scenarios.

Trump’s executive order takes place amid rising global tensions. Recently, Russia reportedly deployed troops to Venezuela, and it was just a month ago that the Kim–Trump summit ended poorly. North Korean state media has explicitly threatened that it has the ability to carry out an EMP attack.

The executive order also pays attention to developing an emergency response to an EMP in case one does occur, updating operational plans, and communicating that information.

Pry cautioned that, even though this is a good executive order, there is still work to be done.

“No executive order, no matter how well crafted, can succeed, unless the White House is willing to bulldoze through inevitable opposition from lobbyists, Obama-holdovers, and the Deep State. The EMP executive order is not the end of the long struggle to achieve EMP national preparedness, but perhaps the beginning of the end,” he said.