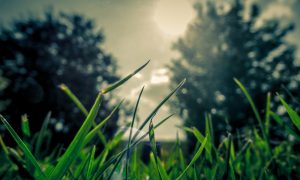 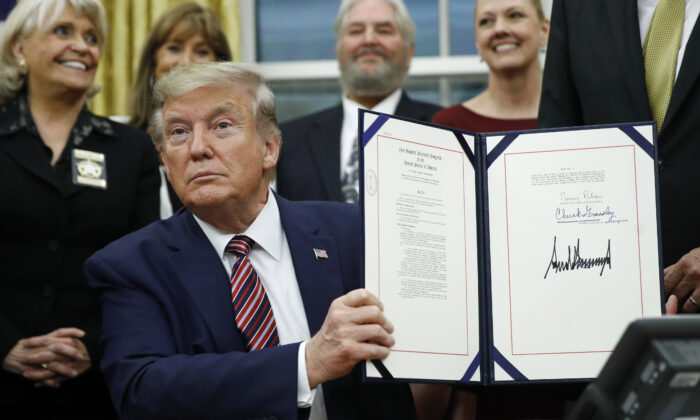 President Donald Trump displays the Preventing Animal Cruelty and Torture Act after signing it during a ceremony in the Oval Office of the White House, on Nov. 25, 2019. (Patrick Semansky/AP Photo)
Trump Administration

The law, Prevent Animal Cruelty and Torture (PACT) Act, would allow federal authorities to prosecute people engaged in a heinous form of animal abuse known as “crushing,” where individuals maim and torture animals.

PACT Act was introduced by Sens. Pat Toomey (R-Pa.) and Richard Blumenthal’s (D-Conn.) and was unanimously passed in the Senate on Nov. 5 and the House on Oct. 23.

During the signing, Trump said he was pleased to sign the PACT Act into law. He said, “we have the responsibility to honor the dignity of God’s creation. With today’s Act we take the critical step of being more responsible and humane stewards of our planet.”

Toomey called the enacting of the legislation a “major victory” for the protection of animals from abuse while Blumenthal said he was “grateful” to see it signed into law.

“The barbaric torture of animals has no place in a civilized society and should be a crime—and thanks to this new law, now it is,” Blumenthal said in a statement.

Official: The PACT Act – which provides the first ever comprehensive federal prohibition against animal torture & abuse – is law. For 5 yrs, @SenBlumenthal, @HumaneSociety, & I have worked to get this done. Appreciate everyone who helped us along the way! https://t.co/q2HMeuoCBx

The Humane Society of the United States welcomed the news in a statement describing it as a “defining moment” for animal protection in the country. The animal welfare organization said that while 50 states have laws against animal cruelty, there was no federal ban, causing a gap in the law. The new law will provide federal authorities with the tools and resources to go after individuals who commit such acts within federal jurisdiction.

“The approval of this measure by the Congress and the president marks a new era in the codification of kindness to animals within federal law. For decades, a national anti-cruelty law was a dream for animal protectionists. Today, it is a reality,” Kitty Block, president and CEO of the Humane Society of the United States, said in a statement.

BREAKING: The president has just signed the PACT Act into law! 🎉

We now have a federal anti-cruelty statute that will allow us to crack down on some of the worst and most malicious acts of animal cruelty.

This is a historic day for animals, thanks to YOU!🐾 pic.twitter.com/S1x7u8AhxW

— The Humane Society of the United States (@HumaneSociety) November 25, 2019

Along with the Humane Society, other groups such as the Animal Wellness Action, National Sheriffs’ Association, Fraternal Order of Police, and the Association of Prosecuting Attorneys endorse the legislation.

The new law expands on a 2010 law that bans the sale of videos depicting animal crushing. It would ensure that individuals who are found guilty of torturing animals face felony charges, fines, and up to seven years in prison.