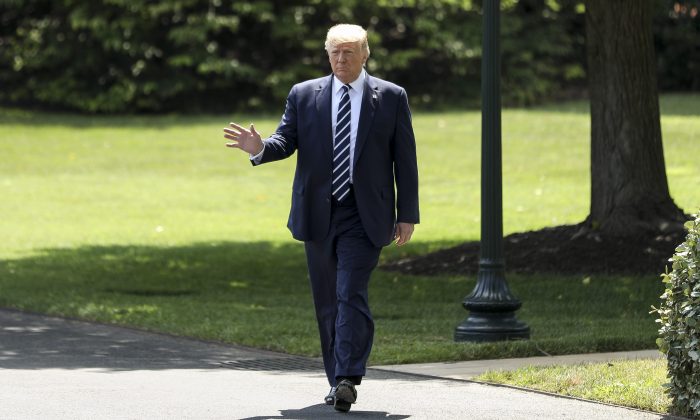 President Donald Trump made a surprise appearance at a wedding in New Jersey.

The wedding had the “Make America Great Again” theme, and it was held at Trump National Golf Club Bedminster in New Jersey, TMZ reported on July 21.

“USA, USA, USA,” and “Trump, Trump, Trump,” were chanted when the president showed up on the night of July 20.

Trump is seen waving hello to the crowd and kissed the bride.

The bride appeared to say, “You’re the best” to Trump in a video posted by TMZ.

So honored to have President Trump @realDonaldTrump at my brothers wedding last night at @TrumpBedminster . Thank you for making their dream come true! #45 #KAG #2020 #USA @realDonaldTrump pic.twitter.com/hwlxaIQpYH

A number of people wore “MAGA” hats during the wedding and posed with Trump, the report noted.

The groom and bride are reportedly fans of the president, and their social media accounts are adorned with support for him.

The two got engaged at the Trump National Golf Club Bedminster in 2017.

Other details about the wedding are not clear.

As Business Insider reported, Trump has shown up to weddings at the Bedminister location at least five other times.

“If he is on-site for your big day, he will likely stop in & congratulate the happy couple,” read an old Bedminster National Golf Club brochure read, reported the New York Times.

Several weeks ago, a Michigan couple threw a “MAGA”-themed wedding in Kalamazoo.

“It looked like America threw up all over my wedding — and I’m not sorry,” newlywed Audra Johnson told Fox 17. She wed U.S. Marine veteran Jeff Johnson in the Trump-themed ceremony on July 4th.

According to the Fox station, she and her husband included “don’t tread on me cufflinks,” a petition for a pro-life “heartbeat bill,” and Ameican flag nails, but the bride’s dress contained a secret.

“The dress is actually an Andre Soriano original,” Johnson added. “It’s actually made out of a MAGA flag.”

Soriano is known for pro-Trump gowns, including one that was worn at the 2017 Grammys.

“We were gonna do our photos with the Trump hats and she said, ‘You know I love you, but I can’t wear the Trump hat,'” Johnson continued. “I said, ‘It’s OK. It’s OK. Just wear a red hat. We still love you. We can have completely different opinions about everything and still love each other.”

Her husband, Jeff, wore his Marines uniform during the ceremony, MLive reported.

She added that the groom’s father didn’t attend due to his displeasure with Trump.

“It wasn’t a political stunt — it’s legit what we wanted. It wasn’t to make a political statement,” Johnson added to MLive. “I want people to realize that it was such a diverse group of people that got together that day. We were able to understand that we don’t all have to agree to still share love together. I think that’s what people are missing out on.”