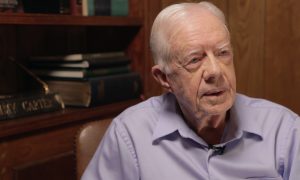 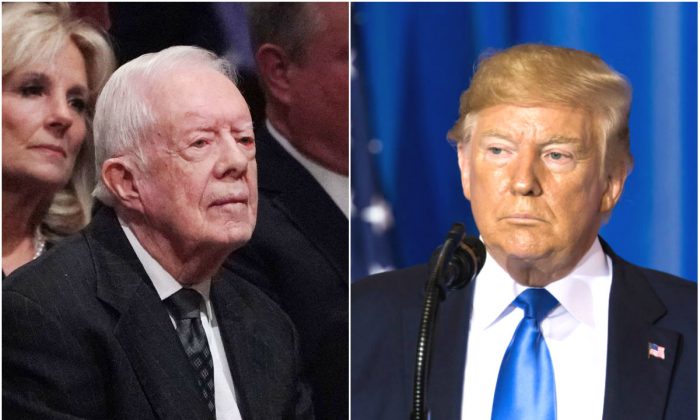 President Donald Trump has responded to Jimmy Carter’s controversial comments in which the former president suggested Trump would not be in the White House if not for help from Russia.

Trump made his comments during a press conference after the G-20 summit in Osaka, Japan, on June 29 after he was asked for his reactions to Carter’s remarks by a reporter.

“Russia, Russia, Russia. Isn’t it crazy?” Trump began. “Jimmy Carter—look, he was a nice man. He was a terrible President. He’s a Democrat. And it’s a typical talking point. He’s loyal to the Democrats, and I guess you should be.”

Trump responds to Carter:
“He’s a nice man. He was a terrible president. He’s a Democrat and it’s a typical talking point. He’s loyal to the Democrats and I guess you should be …As everybody now understands I won not because of Russia, not because of anybody but myself.” pic.twitter.com/PFU7KVJv43

“But as everybody now understands, I won not because of Russia, not because of anybody but myself. I went out—I campaigned better, smarter, harder than Hillary Clinton. I went to Wisconsin. I went to Michigan the night of the vote. I had 32,000 people at 1 o’clock in the morning on Election Day. I won Michigan. I won Wisconsin. I won Pennsylvania. I won states that traditionally haven’t been won by a Republican. For many years haven’t been won by a Republican,” Trump continued.

Trump said he found it surprising that the former Democratic president, from 1977-81, would make such a statement, adding that Carter was not popular with his own party.

“He’s been trashed within his own party. He’s been badly trashed. I felt badly for him because if you look over the years, his party has virtually—he’s like the forgotten president. And I understand why they say that. He was not a good president. Look at what happened with Iran. That was a disaster. What Iran did to him—they tied him up in knots,” Trump said.

On June 28, Carter said he did not believe Trump had won the 2016 presidential election legitimately while speaking at a Carter Center conference on human rights. He suggested that if the Russia interference was “fully investigated” it would show that “Trump didn’t actually win the election in 2016.”

“He lost the election, and he was put into office because the Russians interfered on his behalf,” Carter said.

He was subsequently asked whether he thought Trump was an “illegitimate president” in which he replied, “based on what I just said, which I can’t retract, I would say yes.”

Former President Jimmy Carter: If fully investigated, it would show that Trump didn’t actually win the election in 2016. He lost the election and he was put in office because the Russians interfered …on his behalf.
🎥 https://t.co/CYSBIK3qHF pic.twitter.com/o71Z4InVxB

Carter’s comments on June 28 came after the former president praised Trump for his recent decision to not take military action against Iran after the Islamic regime shot down a U.S. Navy drone over international waters.

“I agree with President Trump on his decision not to take military action against Iran,” Carter said after returning to public activities following his hip surgery.

In April, the two presidents conferred about U.S. relations with China in a phone call, which the White House confirmed in a statement, according to the Washington Examiner.

“The president has always liked President Carter and First Lady Rosalynn Carter, and extended his best wishes to them on behalf of the American people,” it added.