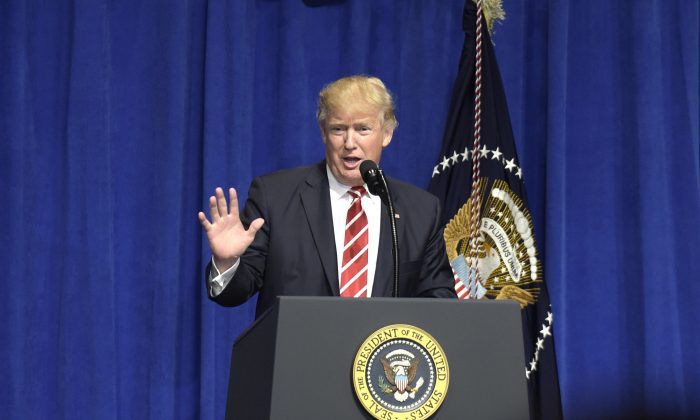 In his first speech to the military, President Donald Trump said he’s fully behind the troops, while going after the news media for not reporting on terrorist attacks.

“It’s gotten to a point where it’s not even being reported,” he told senior commanders at MacDill Air Force Base in Tampa, Fla.. “And in many cases, the very, very dishonest press doesn’t want to report it.”

“They have their reasons and you understand that,” the president added, according to televised remarks of his speech.

In his speech, Trump expressed his appreciation of the military.

“Finally, on behalf of the entire nation let me express our gratitude to all members of our military,” Trump said. “We salute the Army, Marine Corps, Navy, Air Force, and Coast Guard, along with our civilian defense personnel, who are so important to the success of what we’re doing.”

“As your president, I have no higher duty than to protect the American people.”

Trump said that “we have to defend our nation. And we will do that, believe me. Each and every one of you is central to that mission,” he added. “We will ensure that the men and women of our military have the tools, equipment, resources, training, and supplies you need to get the job done.”

“We strongly support NATO,” he later said. During the campaign, Trump said that all member states need to contribute to the alliance, and he reiterated that statement on Monday.

“Those serving at CENTCOM have bravely fought across the theater of war in the middle east and bravely battled a vicious enemy that has no respect for human life,” he said.

“The challenges facing our nation, nevertheless, are very large—very, very large. We are up against an enemy that celebrates death and worships destruction. ISIS is on a campaign of genocide, committing atrocities across the world. Radical Islamic terrorists are determined to strike our homeland, as they did on 9/11, as they did from Boston, to Orlando, to San Bernadino,” he said. “To these forces of death and destruction, America and it’s allies will defeat you. We will defeat them. We will defeat Radical Islamic terrorism and we will not allow it to take root in our country.”

Trump also touched on his recent executive order on immigration, saying “we need strong programs” to vet people coming into the United States “so that people that love us and want to love our country, and will end up loving our country are allowed in. Not people that want to destroy us and destroy our country.”

He added, “Freedom, security, and justice will prevail.”