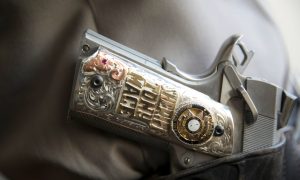 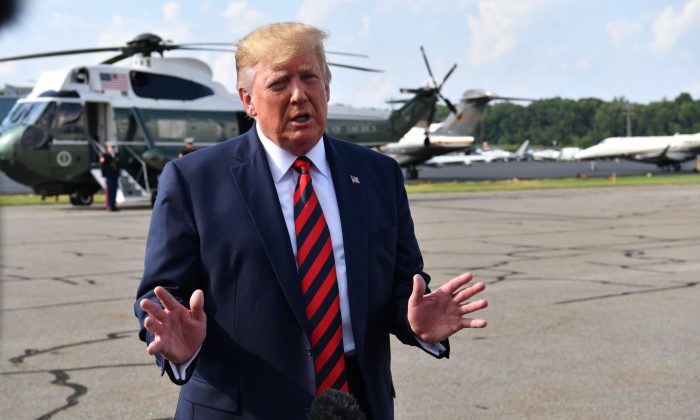 President Trump Considering Many Sides in the Gun Control Debate

President Donald Trump has reiterated his support for expanding background checks for gun buyers, but said he wants to avoid the “slippery slope” of eroding citizens’ second amendment rights.

President Trump mentioned that he is considering all sides weighing in on gun control including Democrats, Republicans, the NRA, and gun owners. “We’re dealing with everybody. And I think we’re going to have something, hopefully, that’s meaningful.”

When questioned by a reporter if the president of the NRA, Wayne LaPierre, had influenced his decision to abandon background checks, he responded, “No, I didn’t say anything about that.

“We had a great talk with Wayne yesterday. We just talked about concepts. Wayne agrees things have to be done also. And we have areas where we can close—for instance, we did fix NICS last time.”

At present, the National Instant Criminal Background Check System (NICS) is used for background checks involving sales to licensed firearms dealers, which make up the majority of firearm sales.

Democrats have said that the president is not doing enough to curb gun violence.

While the NRA can pull @realDonaldTrump back—they can’t stop the 90% of Americans who want universal background checks.

Up to this point, conservatives have been unwilling to sign on to Democrat-backed gun control bills that passed the House, saying doing so would endanger the Second Amendment without stopping the criminals who carry out mass shootings.

According to the NRA website, “background checks don’t stop criminals from stealing firearms, getting them on the black market, or getting them from straw purchasers.”

The Department of Justice reports that 77 percent of criminals in state prison for firearm crimes get firearms through theft, on the black market, from a drug dealer or on the street, or from family members and friends, while less than one percent get firearms from dealers or non-dealers at gun shows.

In 2018 the Trump administration outlawed bump stocks and other gun modifiers that make semi-automatic firearms fire faster after the 2017 mass shooting in Las Vegas, Nevada, which left 58 dead and over 800 injured. The ban upset some conservatives, but the Supreme Court upheld the ban earlier this year.

President Trump has acknowledged the fact that gun rights groups are an important part of his voting base and that he will uphold their right to bear arms.

“We have background checks, but there are loopholes in the background checks. That’s what I spoke to the NRA (National Rifle Association) about yesterday. They want to get rid of the loopholes as well as I do,” he said. “Then all of a sudden we’re talking about, Let’s take everybody’s gun away. People need weapons, unfortunately, for the protection. Don’t want to take away people’s Second Amendment rights.”

NRA president LaPierre wrote on Twitter, “I spoke to the president today. We discussed the best ways to prevent these types of tragedies. President Trump is a strong #2A President and supports our Right to Keep and Bear Arms!”

I spoke to the president today. We discussed the best ways to prevent these types of tragedies. @realDonaldTrump is a strong #2A President and supports our Right to Keep and Bear Arms! – Wayne LaPierre

Trump acknowledged gun violence as a national health emergency but repeated his point that guns don’t pull triggers, people pull triggers. He emphasized that he wants to keep guns out of the hands of the mental ill.

The Washington Examiner reported on Aug. 21 that March for Our Lives recently unveiled their sweeping new gun control proposal. A portion of this plan would include potential gun owners undergoing background checks, in-person interviews, personal reference checks, meticulous gun safety training, and at least a 10-day waiting period before finalization of any gun purchase.

Gun Rights groups and gun owners say banning certain types of weapons and expanded background checks would do little to solve gun violence and mass shootings because the assailant would find an alternative way to obtain the weapon.