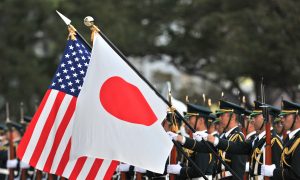 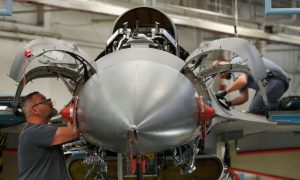 WASHINGTON—President Donald Trump announced the release of the 2019 Missile Defense Review on Jan. 17, while Pentagon officials highlighted the increasing threat of new missile technologies being developed by foreign nations and the growing importance of space-based weapons systems.

“Our goal is simple: to ensure that we can detect and destroy any missile launched against the United States anywhere, any time, any place,” Trump said.

Describing growing threats from missile attack, Acting Secretary of Defense Patrick Shanahan said, “[T]oday, the number of new missile programs around the world is growing disproportionately to other capabilities. Writ large, the rest of the world is not developing new fighter and bomber aircraft. They are developing missiles,” reflecting the review’s assessment of an increasingly complex threat.

While earlier administrations have principally focused on ballistic missile attack from foreign adversaries, the report additionally emphasized advanced cruise missile and hypersonic missile technology under development by Russia and China.

At a press conference following the announcement, Undersecretary of Defense for Policy John Rood called this new emphasis a noteworthy change in U.S. defense policy, “the next era of missile defense.”  He described the new U.S. approach as “robust” in utilizing new approaches and technology and in working with U.S. allies, echoing comments from President Trump in his announcement speech.

“We’ve had some very substantial and successful and collaborative efforts with countries like Japan,” as well as with NATO allies and the Middle East, Rood said.

In speaking to specific foreign threats, Rood confirmed that North Korea could now reach the United States with its current ballistic missile technology.  The review provides a “sizing construct that will be sufficient to outpace the scale of the North Korean threat.”

Undersecretary for Research and Engineering Michael Griffin, in speaking to emerging advanced cruise missile and hypersonic technology out of Russia and China, said that the “strategic implications” of these systems’ capability to put U.S. forces at risk required a response to “these newer systems as well as the legacy strategic missiles.”

A large component of countering the Russian and Chinese hypersonic threat will come in the deployment of space-based systems, to include sensors to detect attack as well as interceptors.  Undersecretary Griffin described a plan this year to deploy sensor satellites in low Earth orbit, noting that this had been a directive from Congress.

Neither Rood nor Griffin would provide details as to the amount of funding within the Pentagon budget to be dedicated to the plans outlined in the MDR, or if any would come from the Space Force announced by President Trump last year.