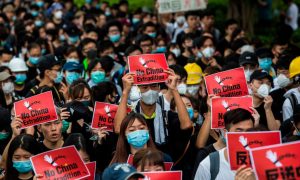 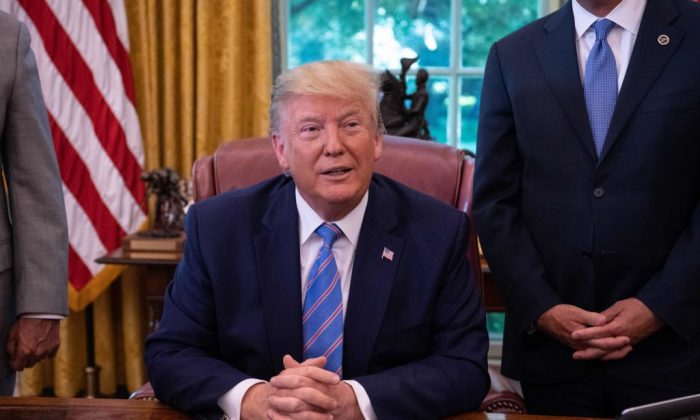 President Donald Trump speaks to the press after signing a bill for border funding legislation in the Oval Office at the White House in Washington, D.C., on July 1, 2019. (NICHOLAS KAMM/AFP)
World

U.S. President Donald Trump and the European Union have expressed concerns about the latest clash between protesters and police in Hong Kong.

On July 1, the 22nd anniversary of Hong Kong’s handover from British to Chinese rule, over half a million people took to the city’s streets to demand the local government withdraw a controversial extradition bill. Millions of Hongkongers also took to the streets in two separate marches last month to protest the bill.

But the anniversary march has now been overshadowed by a group of young protesters who stormed and vandalized the city’s Legislative Council (LegCo) after forcing their way into the building by shattering glass doors with a metal trolley and poles.

All protesters inside LegCo eventually left at around 12:30 a.m. local time on July 2. Meanwhile, local police fired multiple rounds of tear gas to disperse the crowds outside of LegCo.

Speaking inside the White House on July 1, Trump said the protesters who forced their way into LegCo simply wanted democracy.

“Well, they’re looking for democracy and I think most people want democracy. Unfortunately, some governments don’t want democracy,” Trump said, according to AFP.

He added: “That’s what it’s all about. It’s all about democracy. There’s nothing better.”

A State Department spokeswoman also commented on the latest incidence at LegCo, urging “all sides to refrain from violence,” according to Reuters.

“Hong Kong’s success is predicated on its rule of law and respect for fundamental freedoms, including freedoms of expression and peaceful assembly,” she said.

The European Union also issued a statement, saying that those who stormed the LegCo are different from the vast majority of demonstrators, while urging for restraint to avoid an escalation in response.

“The actions today of a small number of people, who attempted to force their way into the Legislative Council premises, are not representative of the vast majority of demonstrators, who have been peaceful throughout successive protests.”

Also on July 1, Trump spoke about how he and Chinese leader Xi Jinping had talked about the protest in Hong Kong while the two world leaders were in Japan for the G-20 summit.

The G-20 is an international forum of cooperation, with an annual summit attended by government representatives and central bank governors from the European Union and 19 other countries, including Canada, China, Japan, the UK, and the United States. This year, the summit was held in Osaka on June 28-29. In 2018, it was held in Buenos Aires.

“I hope it gets solved. I was with President Xi of China. We had a great talk, a great discussion, we’re talking about doing something and we talked about it briefly, but that’s very sad. I’ve rarely seen a protest like that,” Trump said, according to the Wall Street Journal.

The two leaders met on the sidelines of the G-20 summit on June 29.

Prior to the G-20 summit, protesters in Hong Kong raised more than HK$5 million ($640,606) in a crowdfunding campaign to place front-page open letter advertisement on international newspapers, hoping that the extradition bill would be on the agenda at the summit.

We raised over 5million Hongkong dollar in a day. And use a day to contact newspaper all over the world & complete the layout. Hongkonger the best.
STAND WITH HONG KONG AT G20#antiELAB #FreedomHKG pic.twitter.com/nPl48WA4Ws

Japanese Prime Minister Shinzo Abe also brought up the Hong Kong protest in a meeting with Xi on June 27, telling the Chinese leader the importance of a free and open Hong Kong under “one country, two systems” model.

The model is currently used in Hong Kong, since the city’s sovereignty was handed over from Britain to China on July 1, 1997, which was intended to preserve its autonomy and freedoms while under the rule of China’s Communist Party. However, the city has seen the encroaching influence of Beijing impact local politics, education, and freedom of the press in recent years.

Aside from Trump and Abe, it is not known if other world leaders also raised the issue of Hong Kong’s sovereignty with Xi.

On June 26, thousands of protesters gathered for a G-20 rally at Edinburgh Place, Hong Kong, urging that members of G-20 would pressure Hong Kong government and Beijing to withdraw the extradition bill.