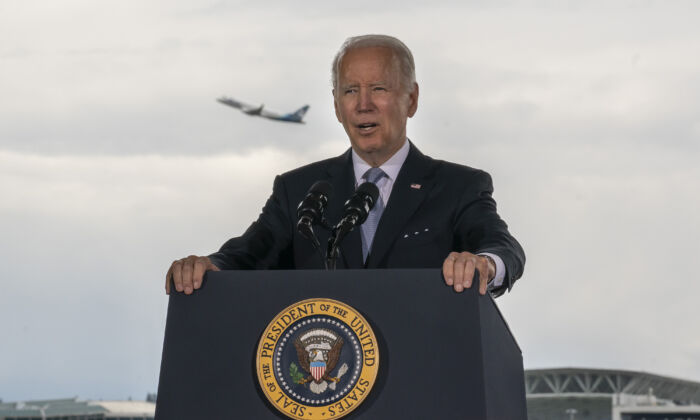 U.S. President Joe Biden delivers remarks on infrastructure at the Portland Air National Guard Base on April 21, 2022 in Oregon. The speech marks the beginning of the president's multi-day trip to the Northwest, with stops in Portland and Seattle Washington. (Nathan Howard/Getty Images)
US

President Joe Biden made his first west coast visit as commander-in-chief this week, talking infrastructure and attending a fundraiser in Portland on April 21 before heading to Seattle to celebrate Earth Day on April 22.

The president’s visit began with a speech at the Portland Air National Guard Base hangar at Portland International Airport, where he highlighted the $1.2 trillion infrastructure plan he signed into law on Nov. 15 and described how it impacts an ongoing project to make PIA runways more earthquake resilient.

“We’ve allowed our airports to lag far behind our competitors,” Biden stated. “Our airports are now ranked 13th in the world. But now we’re going to invest in ourselves and lead the world again.”

“We’re investing $25 billion to modernize U.S. airports across the country. And Portland International Airport is a perfect example.”

He went on to describe a project announced on March 21 by Oregon’s U.S. senators Jeff Merkley and Ron Wyden, and U.S. Rep. Earl Blumenauer.

Portland will receive federal funding for a seismic upgrade to one of its runways with the goal of ensuring it remains operational following a Cascadia Subduction zone earthquake.

“The airport sits on an earthquake zone,” the President explained. “A major earthquake could shut this area down. And that’s why we’re spending $3.75 million to build a resilient runway modelled on a Japanese airport that remained open after that nation’s 2011 earthquake.”

The infrastructure funds will also help with a $2 billion renovation of the airport’s main terminal, he continued. The project will expand the terminal and install a new 392,000-square-foot, curved roof built from mass timber.

“Almost every piece of wood being used was harvested from local forests,” the president explained.

In addition to projects at the airport, “this year alone we’re delivering $662 million to modernize roads and bridges in Oregon plus another $53 million will be dedicated to bridges alone,” he continued.

“We’re also replacing 100 percent of the lead pipes to bring clean water to Oregonians while creating jobs for plumbers and pipefitters in the process,” he continued. “And we are sending $100 million to Oregon to make high-speed internet available everywhere in the state.”

Biden also referenced the $33 million spent in January to modify the Coos Bay jetty and expand the port.

The president addressed inflation as well, attributing it to supply chain disruptions caused by the COVID-19 pandemic as well as gas price increases caused by “Putin’s price hike.”

After his airport appearance, the president greeted donors at a fundraiser for the Democratic Grassroots Victory Fund, a super-PAC that provides cash to Democratic parties of all 50 states as well as the Democratic National Committee. That fund has already raised more than $14 million this year, according to Open Secrets.

Originally slated to be held at the home of Win McCormack, a longtime Democratic donor and the owner and editor of The New Republic, interest in the event caused organizers to move the reception to the Portland Yacht Club. Attendees reportedly paid as much as $36,500 to attend.

Following the reception, the president departed for Seattle to continue his west coast swing.