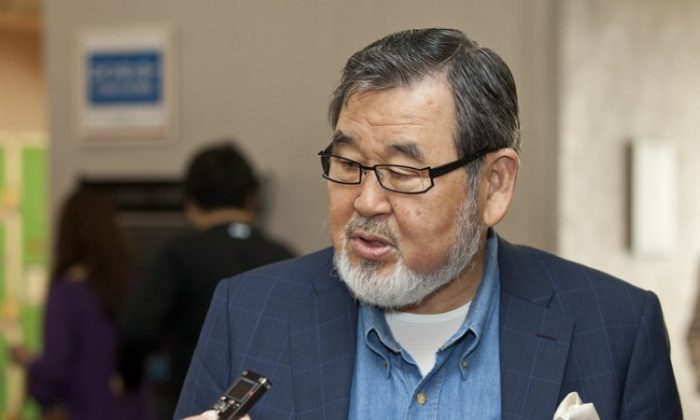 Mr. Hironori Ueda, president of a fashion design company, come all the way from Yamaguchi Prefecture to Fukuoka to see Shen Yun on May 1, 2013. (Yu Gang/The Epoch Times)
News

FUKUOKA, Japan–The FuKuoKa SunPalace Big Hall was graced on May 1 by the arrival of the New York-based Shen Yun Performing Arts Touring Company. As Fukuoka is one of the major cities that is famous for sending envoys to China’s Tang Dynasty court to learn the culture of the continent and world affairs, many Japanese there were eager to see Shen Yun’s artistic feast on the last leg of the company’s 2013 Japan tour.

Working in the fashion design industry, Mr. Hironori Ueda paid special attention to the Shen Yun costumes and the colors throughout the performance. He said, “The colors of Shen Yun’s costumes are so beautiful and extraordinary. The costumes are full of variety as well, each with unique characteristics. Their colors are especially brilliant, and have unique combinations. As they are so beautiful, they have left a deep impression on me.”

Mr. Hironori Ueda also enjoyed Shen Yun’s animated, digital-backdrop, which extends the stage and transports the audience to another world. “The high-tech animated backdrops are amazingly good. This is my first time seeing the application of this kind of approach to performing arts. It is a novel creation. The coordination between the dancers and the scenes on the backdrops in the program Sand Monk Is Blessed is very vivid and very interesting. The timing of the changing of the scenes, and the overall synchronization is perfect. And it is very creative indeed.”

The program Sand Monk Is Blessed was adapted from the beloved Chinese classic Journey to the West, which details a monk’s adventures on a pilgrimage to obtain Buddhist scriptures. Along the way, he takes in the magical Monkey King and Pigsy as disciples. This segment of the story begins with a group of children gathering shells by the Flowing Sands River. However, a little girl soon falls prey to a shape-shifting river ogre. As the village mourns her loss, the monk arrives with his disciples.