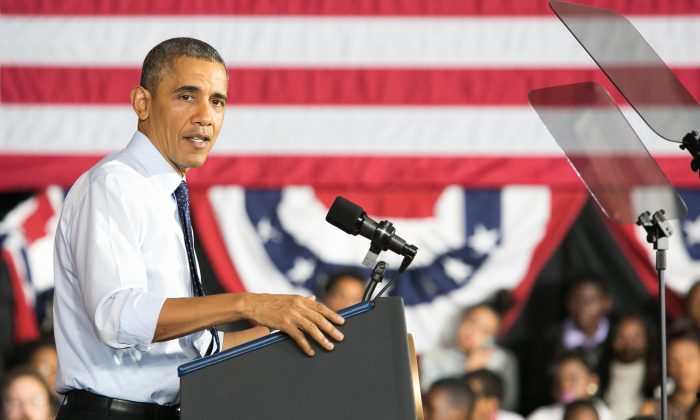 NEW YORK—President Barack Obama visited Pathways in Technology Early College High School, also known as P-TECH, in Brooklyn on Friday, Oct. 25. The president used the opportunity to praise the unique vocational school as part of a promising future for education in America.

“This country should be doing everything in our power to give more kids the chance to go to schools just like this one,” Obama said from the gymnasium of P-TECH with several dozen students behind him.

P-TECH, which opened in Crown Heights, Brooklyn, on Sept. 8, 2011, is the result of a partnership between International Business Machines Corp. (IBM), CUNY, and the city’s Department of Education. The high school offers a six-year program giving the students an associate’s degree as well as a high school diploma. The curriculum is partly guided by IBM. The company designs the courses based on the skills needed for entry level positions.

The city plans to open three more technical schools by the fall of 2014. Other cities have also begun to copy the measure. Chicago opened its first P-TECH-like school in 2012, with plans for more soon.

The president referred to P-TECH in his Feb. 12 State of the Union as a model school and said he couldn’t resist coming to see it for himself.

Principal Rashid Ferrod Davis, who celebrated his 43rd birthday last week said, “I will just pretend this is my birthday party.”

Obama arrived in a helicopter in Prospect Park across the street from where he once lived in 1984 as a college graduate. With his sleeves on his oxford shirt sleeves rolled up, he spoke about his time growing up in Brooklyn.

“When I was living here, Brooklyn was cool, but not this cool,” Obama said to laughs from the crowd.

The president mentioned the newest addition to Brooklyn, the Barclay’s Center. The avid basketball fan talked about the off season pickups for the Brooklyn Nets, Paul Pierce, and Kevin Garnett.

“It is a lesson to all the young people—old people can still play,” Obama said. “We still have some gas in the tank.

Bringing the conversation back to education, Obama recalled how times were different from before when getting a job required less education.

“Those days are over and they are not coming back,” Obama said. “We live in a 21st century global economy.”

Obama said without an education it would be difficult to find a job with a living wage, but the students in the program will be in demand with their degrees when they graduate.

“This is a ticket into the middle class and it is available to everyone who is willing to work for it,” Obama said. “And that is what it should be.”

With the crisis in Washington averted, at least for now, Obama urged Congress to not take any shortcuts with education and make it a priority, arguing the alternative would be worse.

“If you think education is expensive, wait to see what ignorance costs,” Obama said.

For students of the high school, the experience was one they will never forget.

“The fact that we got the attention that I guess you could say we deserved, I’m very proud for myself and my school,” said 11th-grader Leslieanne John, 16.

After leaving the school de Blasio and the president went to Juniors, the famous cheesecake store in Brooklyn. Following the primary, Obama endorsed de Blasio in his mayoral run.

De Blasio’s presence at the school ignited a small controversy because it was announced on his campaign schedule even though politicking at a school is illegal within 60 days of an election. The de Blasio camp insisted it was listed that way simply because of the interest generated by the high-profile event.