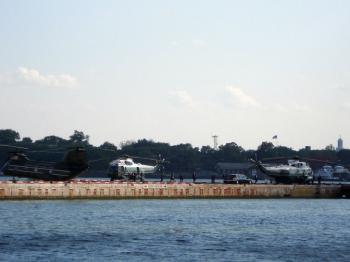 President Obama and his wife Michelle Obama are escorted off a helicopter near Pier 11 in Manhattan on May 30. The two went on a date to dinner and to see a Broadway show. (Courtesy of Trisha Deniega)
US

By Joshua Philipp
Print
NEW YORK—Hundreds of people stood near Pier 11 at the eastern end of Wall Street as President Barack Obama and First Lady Michelle Obama arrived in Manhattan.

The two came to Manhattan on Saturday for dinner and a Broadway show—a date Barack Obama earlier promised his wife. It marked the president’s first trip to New York City since he took office.

"I am taking my wife to New York City because I promised her during the campaign that I would take her to a Broadway show after it was all finished," President Obama said in a statement to the press.

Police and emergency vehicles lined the closed road near the pier, their lights flashing. Two large green military helicopters swooped in and landed on the pier, as bystanders snapped pictures, some unsure of what the occasion was.

The waters were dotted by Coast Guard boats, while on the dock, men in black suits stood near a black limousine and SUVs.

At 5 p.m., two more helicopters moved in and landed on the pier. A group in black poured out, among whom were the president and the first lady. President Obama donned a black suit with no tie, and Michelle Obama wore a black cocktail dress and heels.

As their motorcade set off, the crowd rushed toward the barrier, cheering, “Obama!”

After the motorcade left, members of the crowd talked back and forth. Some showed pictures on their cameras as people gathered around them. One man standing with his wife said with a smile, “I think it’s him.”

In the night that followed, the first couple headed to the classy Blue Hill restaurant in Greenwich Village, which is known for its use of fresh ingredients from local farms.

After dinner, the president and first lady went to the Belasco Theater to see “Joe Turner’s Come and Gone.” The Broadway play by August Wilson tells the story of African Americans in the 20th century.

Their motorcade drew large crowds who snapped pictures and cheered alongside the closed roads.

Yet the date was not free from controversy. The Republican National Committee issued a news release criticizing the president of taking the costly night out while General Motors faces bankruptcy.