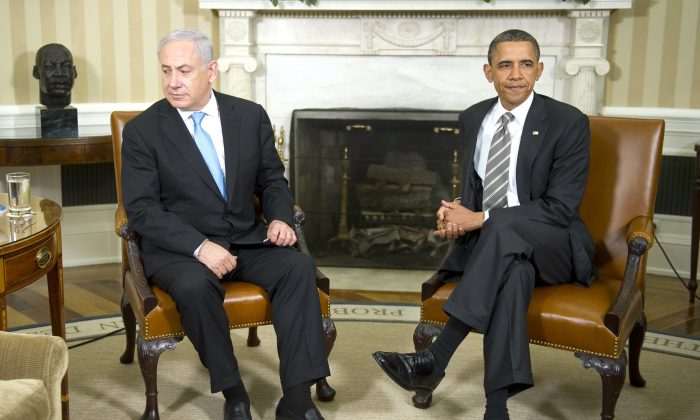 Obama Seeks Political Victories up to the End

There is a tradition that lame duck presidents, as their term draws to a close, begin to make way for their successor. They tend not to initiate significant new business, and on their last day in office, they are photographed leaving the White House for the last time, boarding the Marine One helicopter to begin the first leg of their trip to retirement, somewhere away from the capital. The stage of Washington is relinquished to the new president.

President Barack Obama seems to have a different idea about how to end his second term in office and go into retirement. He has been making news with his last-minute efforts, including allowing a U.N. Security Council Resolution on Israel to pass that breaks decades of U.S. policy.

These moves seem to be partly a bid by Obama to bolster his legacy and partly a signal that he intends to engage in partisan warfare up until the last minute, and perhaps beyond.

The passing of Resolution 2334 was a surprise, coming on the Friday before Christmas and after the U.S. Congress had already adjourned. The vote was 14–0 in favor, with the United States abstaining. The United States has veto power in the Security Council, so a negative U.S. vote would have defeated the measure.

The resolution states that Israeli settlement activity in Palestinian territory occupied since the 1967 war “has no legal validity and constitutes a flagrant violation under international law and a major obstacle to the achievement of the two-state solution.”

The United Nations regards the West Bank and Jerusalem as territory conquered in war, which the Geneva Convention prohibits the conqueror from settling. Israel rejects this interpretation. Among several arguments, Israel says there has never been a legally recognized claim to the occupied territories and therefore Israel’s possession of them after the 1967 war does not fall under the Geneva Convention’s proscription.

Resolution 2334 also condemns terror, calling “for immediate steps to prevent all acts of violence against civilians, including acts of terror.”

The passing of the resolution has been greeted with a firestorm of criticism from supporters of Israel.

Obama’s mentor at Harvard Law School, the liberal Democrat and professor emeritus of constitutional law Alan Dershowitz, told Fox News that with this resolution, Obama has “stabbed Israel in the back.”

According to Dershowitz, the resolution “says the Jews can’t pray at the Western Wall, Jews can’t live in the Jewish Quarter [of Jerusalem], where they have lived for thousands of years.”

For decades, the United States has disapproved of Israeli settlements in the West Bank, but held the line that the disposition of these settlements should be decided by negotiations between Israel and the Palestinians—what is called the “two-state solution.” In 2011, the Obama administration vetoed a Security Council resolution regarding Israeli settlements in order to protect this principle.

Critics have raised concerns that Resolution 2334 will, rather than encourage negotiations between Israel and Palestine, make the Palestinians less likely to negotiate, causing them to seek to obtain a state through the U.N. or through economic sanctions, which the resolution may encourage.

U.N. Ambassador Samantha Power, in her remarks at the Security Council explaining the U.S. abstention, said, “The settlement problem has gotten so much worse that it is now putting at risk the very viability of that two-state solution.”

The Obama administration’s position is that the number of settlements, and the increasing population of Israelis in the West Bank and Jerusalem, is growing so large that it is making the establishment of a viable Palestinian state impossible.

The Obama administration has been concerned for some time that facts on the ground might subvert the possibility of a peace deal. In March 2016, The New York Times reported that “President Obama, resigned to his failure to broker a peace deal between Israel and the Palestinians, is looking past his time in office and weighing a plan that would preserve at least the principle of a two-state solution for his successor to pursue.”

Resolution 2334, if one believes it encourages the two-state solution, would seem to fit this plan. In a speech on Dec. 28, Secretary of State John Kerry rebuked Israel in unusually direct language for its settlement policy and said the U.S. abstention at the U.N. was meant to save Israel from the “most extreme elements” in its government.

Dershowitz finds Obama’s ambition to settle things “past his time in office” illegitimate. Dershowitz described this as “the most undemocratic thing a president can do, to tie the hands of his successor during the lame duck period.”

There is little likelihood of Resolution 2334 being rescinded. It will determine many nations’ policies toward Israeli settlements and affect peace negotiations for the foreseeable future.

For U.S. presidents late in their terms to make last ditch efforts to obtain a peace deal between the Israelis and the Palestinians is not unusual. Ronald Reagan did this, as did Jimmy Carter and George W. Bush. But in these cases the peace efforts were not intended to foreclose what the next president could do.

Other recent efforts by Obama show him seeking to limit Trump’s freedom of action.

On Dec. 20, Obama drew on a little-used provision in a 1953 law to ban in perpetuity drilling in vast swaths of the U.S. Arctic and Atlantic oceans. The Obama administration’s interpretation that the president can ban drilling forever is unlikely to hold, but while the courts work out this issue, there will be a roadblock for Trump’s plans to drill.

Obama Says He Would Have Won a Third Term Against Trump

Obama is also unleashing an avalanche of “midnight regulations”—regulations created during the lame duck period of an outgoing administration. Either the Trump administration will divert attention from working on its own agenda to reverse these rules, or it will give up and let some stand.

Stephen F. Knott, a professor at the U.S. Naval War College and author of books on the presidencies of Ronald Reagan and George W. Bush, wrote via email that Obama “is simply trying to limit his successor’s room to maneuver, whether it’s on Israel or on fossil fuels.”

According to Knott, the administration clearly views Trump’s election as a repudiation of Obama’s eight years in office, so they are trying to make Trump’s task of undoing the last eight years as difficult as possible.

Moreover, Knott believes Obama’s loyalists expect Trump’s presidency to be a “historic failure.” “So they are setting the stage to make sure that historians and political scientists have a stark contrast to point to when the deluge comes,” he said.

Obama’s lame duck actions are setting the tone for his exit from the White House, about which he has been of two minds.

In an interview with Doris Kearns Goodwin, Obama said George Washington remains one of the top three presidents “because he knew when it was time to go. … You serve the nation and then it’s over, and then you’re a citizen again.”

Obama confidants say that the loss of Hillary Clinton has made him more willing to get involved in pushing back against future President Trump. The New York Times reported Obama told a group of Democratic activists, “You’re going to see me early next year, and we’re going to be in a position where we can start cooking up all kinds of great stuff to do.”

In any case, there will likely be no last ride on Marine One for the Obamas. They have bought a mansion a few miles from the White House, and their daughter Sasha has three years of high school to finish.