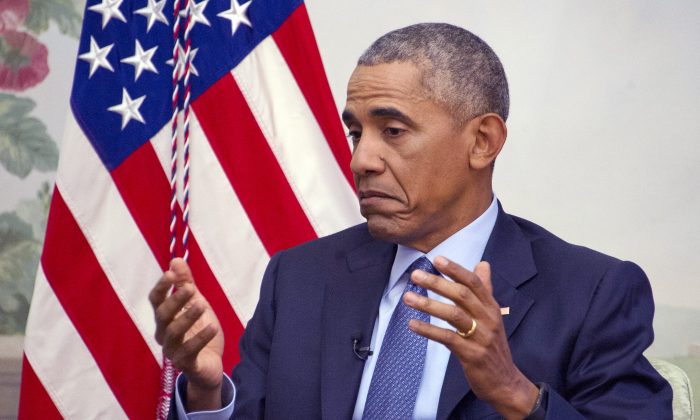 U.S. President Barack Obama is interviewed by Vox at the Blair House on Jan. 6, 2017 in Washington, DC. The president discussed the future of Obamacare during a livestreamed broadcast. (Ron Sachs-Pool/Getty Images)
Politics

With less than two weeks to go in his presidency, President Barack Obama responded to a question about whether he likes President-elect Donald Trump.

Obama told ABC News at first: “You know, he is somebody who I think is very engaging and gregarious.”

He was then asked point-blank by ABC’s George Stephanopoulos if he likes Trump.

“You know, I’ve enjoyed the conversations that we’ve had. He is somebody who I think is not lacking in confidence,” Obama responded.

Obama then said: “It’s probably a prerequisite for the job, or at least you have to have enough craziness to think that you can do the job … I think that he has not spent a lot of time sweating the details of, you know, all the policies.”

Pres. Obama on Malia and Sasha: “All I can say is they have turned out to be terrific young women.” https://t.co/sw48Hvo0uz #thisweek pic.twitter.com/jjnIqYIfdF

After Trump met with Obama at the White House right after he won the election against Hillary Clinton, Trump called the current president “a good man.”

But Trump has since lashed out at Obama on Twitter, saying he has made “inflammatory” statements that will derail a smooth transition process. During the presidential campaign, Obama, when he stumped for Clinton, called Trump “unfit” to serve as president.

Stephanopoulos then asked the president what he tried to impart on Trump in the interim.

“The conversations have been cordial,” Obama said on ABC’s show on Sunday. “He has been open to suggestions, and the main thing that I’ve tried to transmit is that there’s a difference between governing and campaigning.”

Regarding Trump’s use of Twitter, Obama added: “Clearly this worked for him and it gives him a direct connection to a lot of the people that voted for him.”

“I’ve said to him, and I think others have said to him, that the day that he is the president of the United States, there are world capitals and financial markets and people all around the world who take really seriously what he says, and in a way that’s just not true before you’re actually sworn in as president.”

Trump will be sworn in as president on Inauguration Day, Jan. 20, which is also Obama’s last day in office.