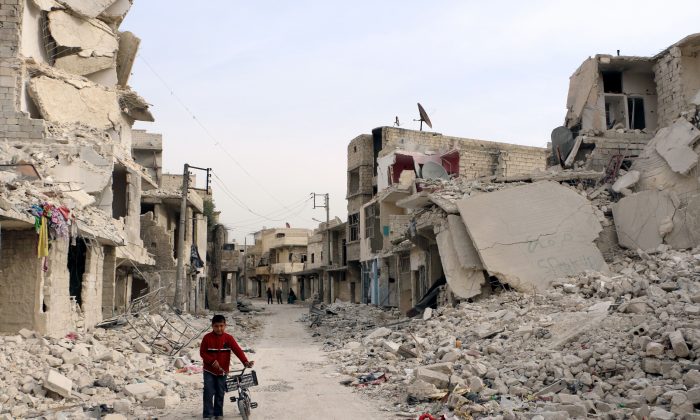 A Syrian boy walks with his bicycle in the devastated Sukari District in the northern Aleppo City on Nov. 13, 2014. (Baraa al-Halabi/AFP/Getty Images)
Middle East

President Barack Obama took time out of his busy schedule to personally welcome a Syrian refugee who recently received word he’s been accepted into the United States.

The refugee announced he’ll be relocating from Istanbul, Turkey to Troy, Michigan on the Humans of New York Facebook page.

The unnamed man told the page that he is an inventor.

“I still think I have a chance to make a difference in the world,” the man is quoted as saying. “I have several inventions that I’m hoping to patent once I get to America. I just hope that it’s safe and that it’s a place where they respect science. I just want to get back to work. I want to be a person again. I don’t want the world to think I’m over. I’m still here.”

The man said that the four houses he built for his family, including his brother’s family, were destroyed by missiles and that his wife and daughter were killed along with five other members.

(3/7) “I built this compound for my family. I saved the money for it, I designed it myself, and I oversaw the…

(4/7) “I was overseeing a project outside the city when the missile hit my house. Nobody was around to help, so my son…

(7/7) “I still think I have a chance to make a difference in the world. I have several inventions that I’m hoping to…

His son and other daughter survived and they fled the country.

The man also revealed that he has cancer, but he’s been to five hospitals in Turkey and all have told him there’s nothing they can do since he has no insurance. His friend in America has told him, though, that it’s a relatively easy surgery that should be done quickly once he arrives in the U.S.

Obama responded to the post on December 9, telling the man he’d be welcomed “with the compassion and support you deserve.”

“As a husband and a father, I cannot even begin to imagine the loss you’ve endured,” Obama said. “You and your family are an inspiration.”

And in what is being seen as a rebuke to Republican presidential candidate Donald Trump, Obama concluded his comment by saying, “You’re part of what makes America great.”