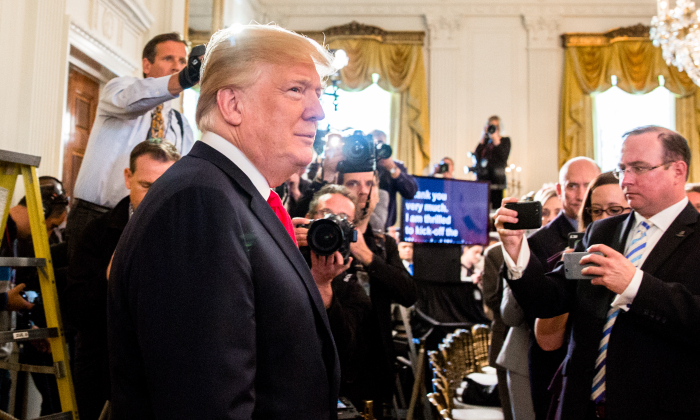 The questions from Special Counsel Robert Mueller to President Donald Trump are covered by the constitution, executive privilege, and case law, according to attorneys Joseph diGenova and Victoria Toensing.

Mueller’s questions were leaked to the New York Times on Monday. Trump slammed the leak as “disgraceful” and repeated his description of Mueller’s investigation as a witch hunt.

Trump once considered diGenova and Toensing for his special counsel legal team but reversed course after conflicts were discovered. The pair explained on Fox News why Trump is insulated from answering Mueller’s queries.

“These are improper questions and I am embarrassed that anybody practicing law for more than one year created these questions for the president,” Toensing said.

Some of Mueller’s questions relate to the firing of Former FBI Director James Comey. Toensing explained that the constitution grants the president the power to hire or fire anyone in his administration.

“All of these questions refer to conduct that is under article two in the Constitution,” Toensing said. “This is what the president does. He can hire people and he can fire people.”

One of Mueller’s questions is about an alleged discussion of a pardon for former National Security Advisor Michael Flynn. DiGenova explained that, from a legal standpoint, Trump’s “pardon power is unreviewable.”

“If he discussed it with anybody, it’s not the special counsel’s business,” di Genova said. “The president can discuss pardons with anybody he wants at any time and it’s unreviewable by Mr. Mueller.”

DiGenova believes that Trump’s legal team will face Mueller in court after the lawyers refuse to honor the special counsel’s request to interview the president. Toensing noted that case law is also on the president’s side should he opt to decline the interview.

“The president is not readily available to be interviewed in any regular kind of case. That means the information sought has to be material, or very important, and the evidence cannot be obtained in any other way using due diligence,” Toensing said.

“So [for example] if there is an automobile accident and three people saw it and one of them is the president, the president is never interviewed,” she added. “That’s just case law, clear and present case law.”

Mueller has been investigating allegations of collusion between the Trump campaign and Russia since last May. Former FBI Director James Comey admitted to leaking memos to the press in order to trigger the appointment of the special counsel. Comey is now under investigation by the Department of Justice Inspector General since the memos he leaked contained classified information.

A yearlong Russia probe by the House Intelligence Committee concluded that neither Trump nor anyone in his campaign colluded with Russia, according to a final report released last week. The report did find that leaks from the intelligence community after Trump’s inauguration “damaged national security and potentially endangered lives.”

The so-called Steele dossier forms the core of the collusion allegations. The dossier is a compilation of opposition research on Trump composed by a former British spy and funded by the Clinton campaign and the Democratic National Committee.

In addition to its biased origins, the claims within the dossier remain unverified despite intense scrutiny by the media, three separate government investigations, and a private probe funded by far-left billionaire George Soros and a secret group of Silicon Valley moguls.