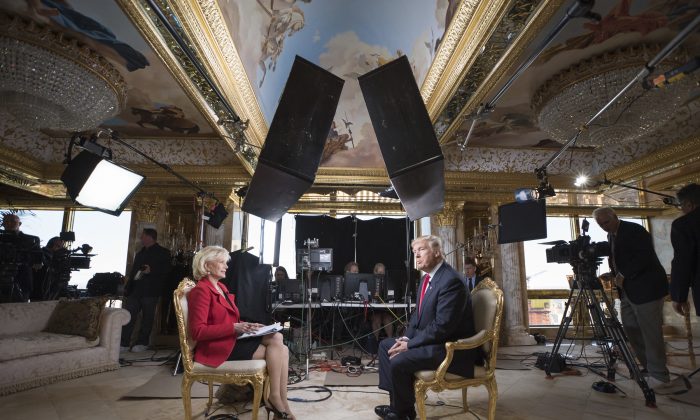 In this image released by CBS News, 60 MINUTES Correspondent Lesley Stahl interviews President-elect Donald J. Trump at his home, Friday, Nov. 11, 2016, in New York. The first post-election interview for television will be broadcast on 60 MINUTES on Sunday. (Chris Albert for CBSNews/60MINUTES via AP)
Politics

During Donald Trump’s interview on CBS News’ “60 Minutes,” his wife, Melania Trump, said that she doesn’t hesitate to tell the president-elect when he’s crossed the line on Twitter.

Lesley Stahl of CBS, in Trump’s first interview since Election Day, asked Melania if she ever tells her husband if he goes too far.

“Yes, I tell him all the time,” Melania said. “I think he hears me, but he will do what he wants to do on the end. He’s an adult. He knows the consequences. I give him my opinion and he could do whatever he likes with it.”

Trump then added, perhaps ironically, “I’m not a big tweeter. I mean, I don’t do too many—but they hit home, and they have to get a point across.”

Trump’s Twitter has been a source of great mirth—but it has got him in hot water. During the election, Trump slammed a former Miss Universe winner on Twitter who made allegations against him in a move that many derided.

When asked about how Melania will fare as the first lady, Trump said, “She will be terrific.”

“She is very strong and very confident, but she’s very warm. And I think she’ll have a platform where she’ll really be able to do a lot of good. And that’s what she wants to do,” he told Stahl.

Chicago Man Claims He Was Beaten While People Yelled, ‘You Voted Trump’

Melania then commented on the responsibilities she’ll have as the first lady.

“A lot of work needs to be done,” she said. “It’s stuff on your shoulders. And we will take care of it day by day. I will stay true to myself. I’m very strong and tough and confident. And I will listen myself and I will do what is right and what feels to my heart [sic].”