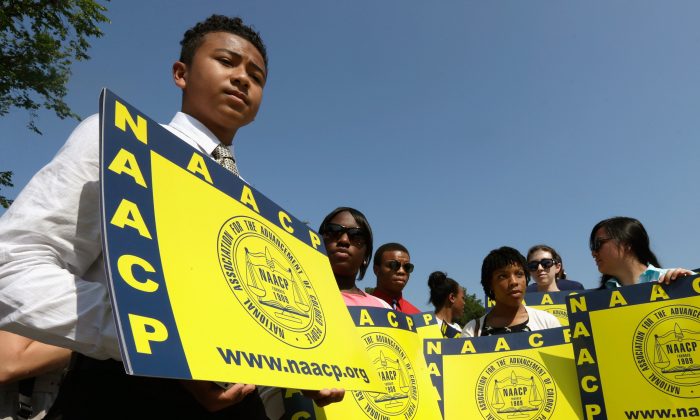 Supporters of the National Association for the Advancement of Colored People (NAACP) hold signs outside the U.S. Supreme Court building on June 25 in Washington, D.C. The court ruled that Section 4 of the Voting Rights Act, which aimed at protecting minority voters, is unconstitutional. (Win McNamee/Getty Images)
Politics

The Supreme Court struck down an essential part of the historic 1965 Voting Rights Act on June 25, potentially opening up voters in some areas to discriminatory practices, drawing criticism from President Barack Obama, who said he’s “deeply disappointed” with the decision.

Under Section 4 of the act, certain places with a history of discrimination against minority voters had to get permission from the Department of Justice before they made changes in voting procedures. It included polling places, voter ID laws, voter registration, and drawing boundaries for local, state and national legislative districts.

According to Attorney General Eric Holder, a federal court said Section 4 of the Voting Rights Act was vital in two 2012 cases, one in Texas and one in South Carolina. Courts blocked Texas from a redistricting plan that would have discriminated against Latino voters, and South Carolina from enacting a voter ID law.

“Without the Section 4 coverage formula, neither of these discriminatory voting changes would have been subject to review and both could have been implemented immediately,” wrote Holder.

The ruling guts the bill by requiring Congress, currently infamous for its state of paralysis, to create a new formula that triggers federal oversight for certain places.  This could be political poison for many representatives.

So even though Section 5, which tells the Department of Justice to watch for discriminatory voting rules, still exists, without Section 4, it won’t have any effect in real life. It is unenforceable, until Congress agrees on a new way to decide when it will be used.

President Barack Obama condemned the ruling in a statement.

“I am deeply disappointed with the Supreme Court’s decision today,” he wrote. “For nearly 50 years, the Voting Rights Act—enacted and repeatedly renewed by wide bipartisan majorities in Congress—has helped secure the right to vote for millions of Americans.”

The ruling upsets decades of well-established practices that help make sure voting is fair, according to Obama. Yet one of the arguments against it is that it is decades old, and the country has changed a great deal since the Jim Crow South of the 1950s and 1960s.

Pastor Kenneth Dukes, a Shelby County, Ala., resident who was represented by the American Civil Liberties Union, said in a document released by the group that he’s “very upset” with the ruling.

“Preclearance is the single greatest tool that has helped make sure people have the right to vote,” he said.” It’s important for people to be able to continue voting without distractions and barriers. Unfortunately voter disfranchisement still exists. We even saw it in the last election.”

Dukes said that both Democrats and Republicans have supported preclearance, and that there was a rare bipartisan agreement on the issue in 2006.

The Supreme Court said that the formula was “seriously out of date” and didn’t reflect “current conditions” anywhere in the country. “Congress may draft another formula based on current conditions,” the court said.

Until June 24, certain places with a history of severe discrimination against minority voters were under federal oversight. Section 4 of the Voting Rights Act meant places like Shelby County, Ala., had to submit planned changes in voting procedure or laws to the Department of Justice. That is the county surrounding Birmingham, Ala.

Shelby County won when the justices ruled Section 4 to be unconstitutional.

The rest of the law is in place.  Voter discrimination is still illegal. For now, it’s harder to stop it.