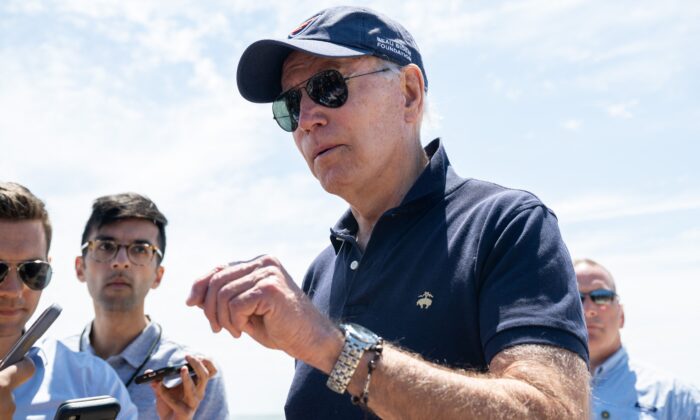 President Joe Biden’s day at the beach briefly turned into a confrontation when a reporter asked him about the likelihood of an imminent economic recession, causing the President to react negatively and accuse the journalist of sounding “like a Republican politician.”

Biden was confronted by reporters at his vacation home near Rehobeth Beach, Delaware, on Tuesday. Initially, the interaction was cordial. When asked by the reporter whether he was confident that Ukraine would become an EU member, Biden responded affirmatively, then quipped, “that’s my press secretary’s daughter.”

However, the interaction quickly turned hostile when the President was asked about the growing likelihood of an economic recession, causing Biden to become incensed.

“The majority of them aren’t saying that. Come on, don’t make things up, ok?” the president responded. “Now you sound like a Republican politician.”

Biden then told the reporter “that was a joke,” in an attempt to diffuse the tensions.

“But all kidding aside, no, I don’t think it is [inevitable],” Biden said. “I was talking to [former Treasury Secretary] Larry Summers this morning and there’s nothing inevitable about a recession.”

In a media appearance on Sunday, Summers said that a recession was likely to hit the United States in the near future.

This incident is not the first time President Biden appeared to grow angry at a reporter for asking a question about the economy under his administration.

“It’s a great asset. More inflation. What a stupid son of a [expletive],” Biden was caught saying on a hot mic last January after reporter Peter Doocy asked the President whether inflation would be a political liability for the 2022 midterm elections.

A growing pessimism about the near and medium-term future of the U.S. economy has plagued Democrats, who fear that their electoral prospects will be harmed by the widespread economic frustration.

The reporter’s question was a reference to the growing numbers of economists who attest that a recession could be likely within this year, drastically up from previous months. A recent survey of 55 economists conducted by the Wall Street Journal estimates the likelihood of a recession in the next year at 44 percent, compared to just 28 percent last April and 18 percent in January.

Figures such as the ones attested to in the Wall Street Journal survey have only been seen heretofore on the eve of a recession. Furthermore, many major financial institutions have revised their predictions to account for a higher likelihood of a recession this calendar year or in 2023.