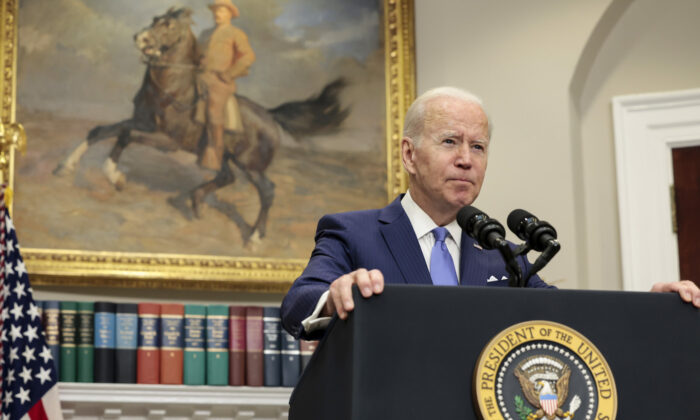 As Ukraine threatens to devolve into another forever war, China watches and waits

According to the latest Quinnipiac poll, 75 percent of Americans are concerned that the Ukraine war may spiral out of control. And no one in their right mind should want another forever war, especially with a country that possesses nuclear weapons.

Yet President Joe Biden, who arguably blundered into this war, seems well on his way to blundering into a wider conflict with Russia.

Not only did Biden fail to deter the invasion, but his administration may also have provoked it. Reckless talk of expanding NATO to include Ukraine, while at the same time failing to provide that country with the means to defend itself, may have convinced Russian President Vladimir Putin that it was now or never.

Was Putin further emboldened to strike by the Afghanistan debacle? China, Iran, and every other bad actor on the planet certainly were. The ineptitude of the Biden administration and the Pentagon were on full display as American citizens, allies, and billions upon billions of dollars in military equipment were abandoned to the Taliban. If a fraction of that equipment had been shipped to Ukraine before they cut and ran, Putin might have thought twice about ordering the invasion.

Of course, reflecting on the Biden administration’s past failures will not extricate Ukraine—or us—from our present predicament. The question is, where do we go from here?

Some of the answers to that question from the president, quite frankly, are alarming. Biden has variously called for Putin’s ouster, threatened the retaliatory use of (nonexistent) chemical weapons, and told U.S. troops they are headed into the war zone. Do we really want another forever war under this commander-in-chief?

Even administration officials who are in full command of their faculties, however, want to use Ukraine as a proxy to destroy the Russian military and effect regime change in the country. Secretary of Defense Lloyd Austin, for example, explained last month that the administration wanted “to see Russia weakened to the degree that it can’t do the kinds of things that it has done in invading Ukraine.”

How will we determine that Russia has been weakened enough that we can bring the carnage to a close? When all it has left is its nuclear arsenal? Austin did not say.

We hear a lot of talk from the Washington War Party that the conflict should continue until all of the territory held by Russia, not just its recent gains in the Donbass, has been reconquered by Ukraine. This includes the two breakaway republics in the Donbass and Crimea, which have been in Russian hands since 2014.

These folks want a military victory, not a negotiated peace, and are willing to arm Ukraine to the teeth with the latest in American weaponry to get it. This is the position of John Bolton, for example, who briefly served as former President Donald Trump’s national security adviser. He wants to escalate, arguing that we should not only send Polish MIGs to Kyiv, but American F-15s and F-16s as well.

“It would be a significant blow to American credibility globally to come as close as Ukraine has to defeating a superpower only to give away at the negotiating table what has been won at such a high cost on the battlefield,” he explains.

Leaving aside the throwaway about America’s global credibility, which is already in tatters because of our ignominious exit from Kabul, this is delusional. Ukraine has not come “close to defeating a superpower.” Instead, as matters now stand, the entire east coast of the country is in Russian hands, including the key port of Mariupol. And Russian forces are poised to capture more territory.

These victories have been costly for the Russian invaders, to be sure, but they have been victories, not defeats.

Now everyone, including U.S. intelligence services, thought that Russia was simply going to steamroll Ukraine in the opening days of the invasion. We all celebrated—myself included—when that didn’t happen.

But while Ukraine may not lose this war, it cannot win it either, not against a vastly larger and more populous Russia. No one reported it, but even the director of the Defense Intelligence Agency recently admitted that, even with massive U.S. and NATO support, all that Ukraine could hope for is to fight Russia to a draw.

Asked if Ukraine can win, DIA head Lt. Gen. Scott Berrier replied: “That is a difficult predication to make. I think where the assessment is at, is a prolonged stalemate should no factor change on either side. In other words, the Russians continue to do what they’re doing, and we continue to do what we are doing for the Ukrainians.”

A “prolonged stalemate” is a pretty good definition of a forever war.

After Iraq and Afghanistan, the American people have had enough of forever wars. Apparently, the Ukrainian people want no part of one either. On May 22, Ukraine President Volodymyr Zelenskyy admitted that the war can only be resolved through “diplomacy.”

Enough is enough. We need to be encouraging Zelenskyy to negotiate, not recklessly urging him to fight to the last Ukrainian.

And then pivot to Asia, where the real threat lies.