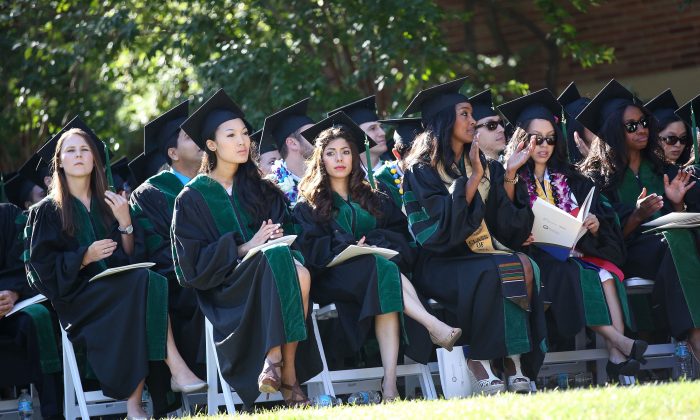 Commencement at UCLA Westwood, Calif., on May 30. (Imeh Akpanudosen/Getty Images for UCLA)
News

The paradox of student loans is like the paradox of the housing bubble and 2008 crash. Bad actors cashed in on a well-intended government policy. Ordinary people bore the cost.

A subset of the higher education system preys on students and veterans, urging them to borrow or use veterans’ benefits for education. The money goes to the school, and the student is left with the debt. Terms for student loans favor lenders over borrowers. About 40 million people owe $1.2 trillion in student debt.

College costs have more than tripled over the past 30 years, and according to the White House, the average college graduate who borrows to pay for school graduates with a debt of $30,000. Federal policy meant to expand access to higher education and to vocational training contributed to tuition inflation, though it was not the only cause.

President Barack Obama said in his weekly address Saturday, “The unemployment rate for workers with a bachelor’s degree is just 3.3 percent—about half what it is for high school graduates. The typical graduate of a four-year college earns $15,000 more per year than someone with just a high school degree. But at a time when college has never been more important, it’s also never been more expensive.”

Obama will announce Monday an executive order to expand his “Pay As You Earn” program that lets borrowers pay no more than 10 percent of their monthly income in loan payments. He will also ask the Treasury Department to work with tax preparers to get the word out about new repayment programs and tax credits, to help borrowers avoid default.

Obama will also be asking Congress to develop and pass student loan reform legislation. Good luck with that, Mr. President.

My biggest quarrel with the administration’s initiative is that it does not do anything to reign in or reduce college costs. Many students will still be in a situation where they need to take out loans to pay for school. In my day (I know that makes me sound ancient), it was possible to work and pay tuition, bit by bit. Work-study programs in college, and summer jobs could make a big dent in tuition. A middle-class family could swing it. Even a student without parental support could swing it, by choosing the most affordable public education.

But now tuition is a bit like health care costs: only the unfortunate pay full retail price. For people with good medical coverage, the official on paper charges are not directly connected to reality, because their insurance ends up paying most if not all of the bill. I think the price of college tuition is also not directly connected to reality. It’s a big number, but it’s assumed that loans and scholarships will get part of the tab.

According to the College Board, published tuition rates in four year colleges in the decade from 2002 to 2012 increased an average rate of 5.9 percent greater than inflation.

Think how it would better society if plain Jane and regular Jack could pay for college and start his or her adult life debt free. Think how much creativity that might unleash. Canada still has affordable tuition. What have they done differently? Some European and Latin American countries offer free higher education. But the argument against that can be that the students who were already going to go to college take up all the slots. We should look at what other countries have done and see what can be helpful to American youth.

A 2010 student loan reform bill has big breaks for certain student borrowers. The Health Care and Education Reconciliation Act takes full effect this year, but it is not for everyone. Some breaks are only for new borrowers who start their loans after July 1, 2014. Some are only available to those who started borrowing after October 2007 and kept borrowing after October 2011.

There is more to it, of course. “This is … very complicated legislation,” according to Holyoke Community College, in information for students.

The main benefits of the program include:
1. Monthly loan payments can be no more than 10 percent of the borrowers income.
2. People in certain public service professions, who keep up payments, get loan forgiveness after 10 years.
3. It’s possible to refinance and get a lower interest rate.
4. Students find loans through the school financial aid office, not through banks.

Helping students pay back loans is worthwhile. What will be even more worthwhile is finding a way to slow and even reverse rising tuitions.