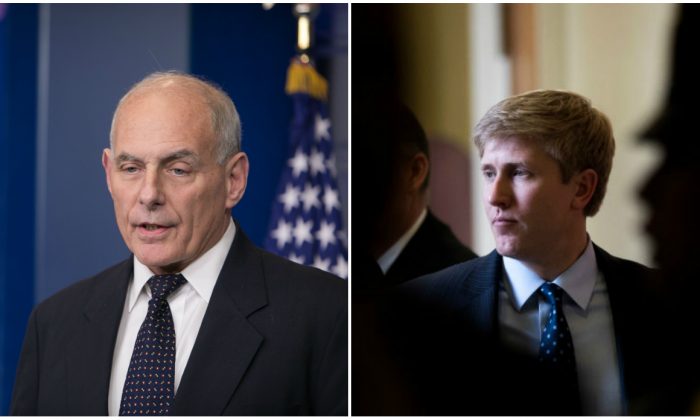 WASHINGTON—Vice President Mike Pence’s chief of staff, Nick Ayers, announced Dec. 9 that he will be leaving by the end of the year, while thanking both President Donald Trump and Pence “for the honor to serve our Nation at The White House.”

“I will be departing at the end of the year, but will work with the #MAGA team to advance the cause,” he wrote on Twitter, before hashtagging his home state of Georgia.

Ayers announced his departure almost in tandem with Trump announcing that his chief of staff, John Kelly, will be leaving by the end of the year.

I am in the process of interviewing some really great people for the position of White House Chief of Staff. Fake News has been saying with certainty it was Nick Ayers, a spectacular person who will always be with our #MAGA agenda. I will be making a decision soon!

“We’ll be announcing who will be taking John’s place. I’ll be announcing that over the next day or two,” Trump told reporters Dec. 8, while on his way to see the Army-Navy football game in Philadelphia, adding that Kelly is “a great guy.”

It had been widely reported that Ayers was Trump’s top pick to succeed Kelly.

Ayers, 36, has advised a series of high-profile Republican governors and has earned a small fortune selling ads to political campaigns. His political experience would have brought another set of skills to the president’s inner circle that wasn’t part of Kelly’s background.

Trump told reporters his next chief of staff might be in place only on “an interim basis.”

In a November interview with Fox News, Trump said he and Kelly “get along well,” but didn’t promise that he would remain in his current position through 2020, as he had said in July.

Over the past 2 years, John Kelly served the @POTUS Administration with great distinction as Sec. @DHSgov & @WhiteHouse Chief of Staff. He will depart at the end of the year with my utmost respect. Thank you General Kelly. We will always be grateful for your service to our Nation

At the time, Trump said he believed Kelly would  “do a spectacular job,” and lauded his time at the Department of Homeland Security (DHS), where he oversaw a reduction in the number of illegal border crossings and implemented Trump’s travel ban on people from terror-prone countries.

“There’s been very little controversy, which is really amazing by itself,” Trump said, praising Kelly’s role in implementing his policies at DHS.

But with the new year less than a month away and 2020 getting nearer on the horizon, Trump is likely looking to his re-election campaign in 2020 and making sure he has the right people in the right places.

Trump announced on Dec. 7 that State Department spokesperson and undersecretary Heather Nauert will be taking over as U.S. ambassador to the United Nations from Nikki Haley, who announced her resignation in October. The same day, Trump announced that William Barr will be taking over as the head of the Department of Justice for Matthew Whitaker, who has been acting attorney general since Jeff Sessions resigned at Trump’s request in November.

Also on Dec. 8, Trump announced Mark Milley will be the new head of the Joint Chiefs of Staff, replacing Gen. Joseph Dunford, whose term ends next summer.

It’s not clear what Kelly will be doing after he leaves the White House. In his announcement, Trump said he “will be leaving–I don’t know if I can say ‘retiring,’” implying he may be taking another job, or hasn’t decided on his next steps.

Kelly is set to announce his departure to his staff on Dec. 10, The New York Times reported.