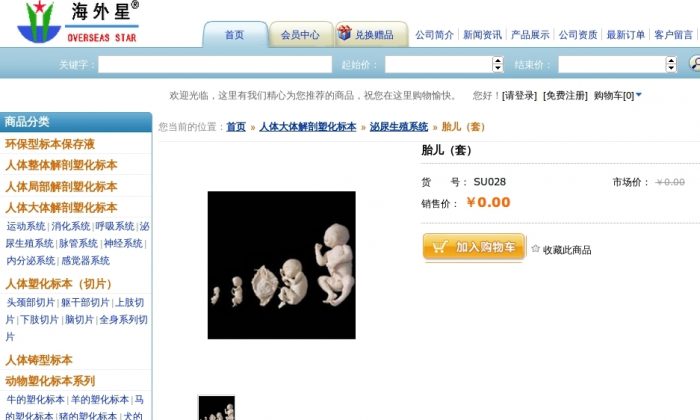 A screenshot from the website of the Beijing Overseas Star Science & Technology Development Co. shows a variety of plastinated fetus specimens for order. Chen Guoxin, director of the firm, said that the specimens may not be sold, but recipients are expected to make a donation of $10,000 to his company afterwards. (Screenshot/Epoch Times)
China

In the annals of all strange things to emerge from China, the wares for sale — but not really for sale — on the website of the Beijing Overseas Star Science & Technology Development Co. must rank among the strangest.

That is, plastinated fetuses. Or more simply: dead unborn babies that have been pumped full of plastic, which preserves them for medical research.

They’re available for sale from between $10,000 and $12,000, according to an English-language advertisement on Alibaba.com, the equivalent of Ebay in China. The company can supply 5,000 of them per year, the ad says.

According to Chen Guoxin, the director of the company reached by telephone, the plastic babies are not actually for sale. On his own website, the price next to them is 0 yuan. This is because, he said, “it’s illegal to traffic human bodies in China.”

Instead, Chen said, “We donate the fetus to medical institutes for research, and they can donate money to us in return. We can negotiate a price for compensation or support to us to avoid legal risk.”

When asked by a reporter how much would be expected as donation, he said “around $10,000.”

Multiple strands of very China-specific developments were required to make way for this possibility. These include an abundance of aborted, dead fetuses as a result of the one-child policy, and secondly, the technical ability to plastinate human specimens, brought to China in the 1990s by the German impresario Gunther von Hagens, who built a multimillion dollar empire by charging people to view his works.

Fetuses are available in sets of 5, from 12 to 20 weeks old; those who need to can also purchase an embryo set (running from 4 to 8 weeks of gestation) complete with placenta and umbilical cord.

Mr. Chen was coy on the conditions of how the fetuses are obtained. He said they came from hospitals, but could not explain why so many were available, and repeatedly cautioned that no money changed hands. Buying and selling fetuses would be illegal in China, he said several times.

He said that his company works with a third party — whose name he would not disclose — that performs the plastination and works with the hospital to obtain fetuses.

Aside from Mr. Chen’s cautions, the rate of abortions and forced abortions in China is known to be extremely high, due to the Chinese Communist Party’s birth control policies, which typically restrict families to one child. The result is a documented, enormous number of abortions, forced and otherwise: an average of 7 million a year, according to official data.

Hospitals have been known to drown or strangle babies in front of their parents, and in one case that stirred public outrage in 2012, a killed fetus at seven months of development was simply placed on a hospital bed next to its distraught mother. It is likely that fetuses of this sort make their way into the ranks of the plastinated.

Mr. Chen was adamant in his discussion with a reporter that the company followed all applicable laws in its processing of plastinated fetuses and other human specimens. He did not explain why they were advertised for sale on Alibaba, where that was supposed to be illegal, however.

The company lists an impressive number of registration certificates and licenses on its website, but phone calls to several of the groups referred to did not clarify matters.

The General Administration of Quality Supervision, Inspection and Quarantine (GAQSIQ), and the China Quality Certification Centre, both of whom are listed on Beijing Overseas Star Science & Technology’s website, said that human specimens are not in their bailiwick.

GAQSIQ recommended a reporter call the Ministry of Health’s consultation hotline. A staff member there, after being apprised of the situation, was surprised and said: “A medical device company like that shouldn’t have the qualification to do research on human specimens. Of course it’s illegal.”

She added: “Doing research on human specimens needs to go through organ donation institutes via legal procedures. A medical device company has nothing to do with human specimens.”

Plastination and its Abuses

The technique of plastination has a checkered history in China. It was pioneered by Gunther von Hagens, who found that China — the city of Dalian, in particular, when it was the stomping ground of disgraced Chinese official Bo Xilai in the 1990s — was particularly accommodating to his line of work.

Von Hagens and, later, a former employee who took von Hagen’s techniques to establish his own plastination empire, were able to obtain bodies with relative ease. Von Hagen’s former partner, Sui Hongjin, is suspected of having used executed prisoners, including the bodies of killed Falun Gong practitioners, among his plastinations, given that the area in which he operated was a key center for the persecution of the practice and the suspected organ harvesting of adherents.