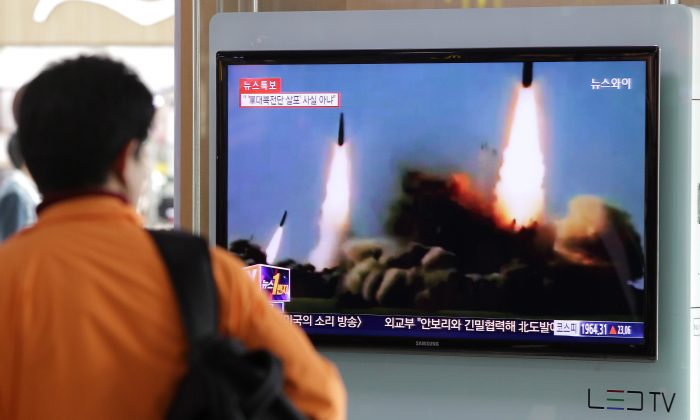 More ominously, the Heritage Foundation states that more than 30 nations have ballistic missiles that can strike the United States, its allies, or American troops stationed abroad while recent events in Syria and the Crimea demonstrate all too well that in this fast-paced world the threats can materialize quickly and you have to, as they say, “go to war with the military you have.”

Consequently, this is a critical moment for defending the U.S. role in international security. America and her allies must continue to invest in missile defense technologies, lest one day an adversary feels compelled to strike in the belief it can deliver a decisive blow using technologies we can, but choose not to, effectively counter.

Our leaders have a duty to protect the U.S. homeland from long-range ballistic missile attack. At present, there is just one system that protects America from these threats—the Ground-Based Midcourse Defense (GMD) system. The GMD, with its silos of missiles based in Alaska and California, is our premier defense against a potential North Korean nuclear attack and also can help protect our troops stationed overseas.

Using a complex system of radars, the GMD is designed to pick up incoming intercontinental ballistic missiles and launch ground-based interceptors in response. Though the entire GMD system is responsible for taking down a threat, it’s the warhead atop the interceptor, the Exoatmospheric Kill Vehicles (EKV) that garners the most attention.

The EKV’s job is to fly into space and strike its target at a closing velocity as fast as 22,000 miles per hour. The impact from the EKV packs enough kinetic punch to knock out intercontinental ballistic missiles with nothing more than skin-to-skin contact—a technology known as “hit to kill.”

This literally is rocket science at its most difficult and complex.

The GMD system has performed successfully in multiple tests. However, it has also failed to intercept incoming missiles in others. EKV gets the bulk of the blame when tests don’t result in intercept, pushing some policymakers to suggest we go back to the drawing board and design an entirely new kill vehicle from scratch. But given the time, cost, and performance constraints this is not a sufficient answer.

As Vice Adm. James Syring, the director of the national missile defense agency, recently stated, “[The] decision was made to field the prototypes because some defense now is better than defense much later. … [W]e cut short the design cycle. And that had risks. And some of those risks are surfacing in our flight tests now.” He is right; and it is also true that in a contest where too late means no defenses at all the reality is that fielding and continuously improving ABM systems is a reasonable path.

The rush to deployment was sparked by the shocking revelation that North Korea had joined the nuclear weapons club. At the time, EKV was barely beyond the proof-of-concept stage, and yet it was hurried into deployment. Since then a lack of funding for redesign and testing have left the program floundering, with minimal changes implemented to improve the proof-of-concept EKV design over the last 10 years.

It seems that we have finally woken up to a crisis of our own creation. President Obama’s recently proposed defense budget allocates more than $700 million to improve this critical system, and Syring has stated that the funding will get the EKV past the finish line and turn it into a “reliable, producible, quality design that … [paces] the threat to the future.”

Significantly, examples abound of defense systems that were blighted by technological challenges and testing failures in their early stages. That includes the THAAD and Standard Missile systems, both of which are now vital elements of the American defense shield and critical to our national security. They each had testing issues in their first development cycle and the luxury of full and complete engineering and productibility design upgrades before deployment, unlike the EKV. We didn’t give up then; we shouldn’t give up now.

More to the point, GMD is the only operational system we have against long-range ballistic-missile attack. The EKV is fixable, but like all ABM efforts it needs military, diplomatic, and technological commitment from government and industry to make it happen. The only other near-term option would be to leave our citizens defenseless against the rogue and unpredictable nations hard at work on the capability to do us harm. And that’s no option at all.

J. Michael Barrett is former director of strategy for the White House Homeland Security Council. He is a frequent national security commentator and a principal with the D.C.-based consulting firm Diligent Innovations.