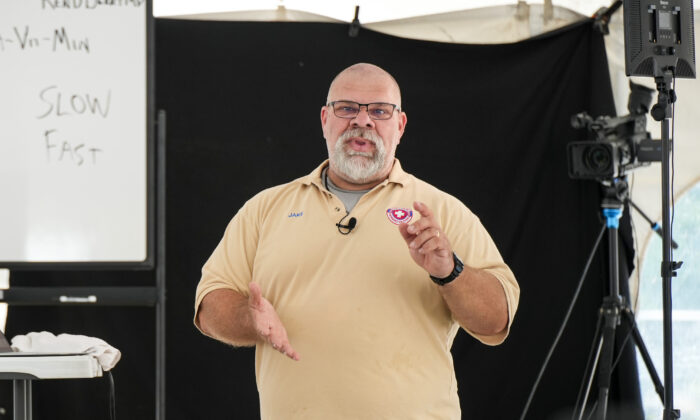 Prepping for Medical Emergencies When No Help Is Coming

CAMDEN, Tenn.—Almost everyone, even those who are focused on preparedness, are “woefully” unprepared medically, said Jake Drumm, a former paramedic and founder of Drumm Emergency Solutions.

“Most people think they should just buy a big ol’ first aid kit and they’re done,” he said at a self-reliance festival in Tennessee on June 12.

Drumm says it’s more important to get training, learn how to use the equipment you have, and have basic knowledge on mid- to long-term care.

He teaches classes on how to manage first aid emergencies in austere environments, such as post-tornado or  hurricane, a vehicle accident, a shooting, or generally if EMS isn’t readily available.

“It’s doing medicine when you don’t have the stuff to do the medicine,” he said. “We have to think beyond the initial care.”

The leading cause of death for the 1 to 45 age group is accidents; half of those are blood-loss trauma, Drumm said. A person can bleed out in three minutes.

The first item is a combat-approved tourniquet and the knowledge of how to apply it, for how long, and how to release pressure without poisoning the body, as well as the permanent damage they can cause.

The second item that Drumm recommends is a quality pressure bandage, often called an Israeli bandage, to help stop bleeding.

“Learn how to apply pressure” to stop bleeding, he said.

The third item is some kind of wound-packing gauze, preferably a military-style dressing that includes a hemostatic agent to aid blood clotting.

The fourth item is a chest seal for any penetrating trauma to the chest such as a bullet wound, and the fifth is protective gear for the carer—gloves and eye protection (a pair of $5 racquetball goggles will suffice, Drumm said).

Beyond the Initial First Aid

When emergency services aren’t immediately, or at all, many other factors come into play when caring for an injured person.

HITMAN is the list to use beyond the initial 15 minutes of emergency care.

Two measures of how well someone is hydrated are how frequently they urinate and the color of their urine (lighter is better).

“The No. 1 cause of death is exposure/hypothermia in austere care environments,” Drumm said. “All these people who got wounds and died, generally died from exposure.”

As for hygiene, if you, your patient, and your equipment aren’t kept clean, other illnesses or infections can cause additional problems.

“You need to calm yourself to give good care,” he said.

The “I” stands for infection and increased temperature. Learn to deal with fevers. With limited exceptions, “as long as that fever’s controlled, as long as you’re drinking and eating, that fever is not going to kill you,” Drumm said.

The “T” represents tourniquets, trends, and tidy up.

“Let’s just say that you have to put a tourniquet on someone and it’s going to be six hours until some kind of definitive care,” Drumm asked.

“Do you think you should leave the tourniquet on for six hours? No.”

Drumm encourages people to learn the protocol for tourniquet conversion, as releasing a tourniquet that has been left on for too long can be fatal.

As for trends, it’s important to keep thorough notes of vital signs and treatments, including times.

“Because in extremis, you will remember nothing. You will have no idea what you did 20 minutes ago to your patient,” Drumm said.

“You will not be able to stay clean in an austere environment. And what that means is, is that you have to work double, triple overtime to keep yourself clean, keep your patient clean, and keep the area clean,” Drumm said.

The “M” of HITMAN stands for medications.

A large chunk of the American population takes prescribed medication on a daily basis, including antidepressants, anti-anxiety medications, or antipsychotic drugs.

“Who thinks it’s a good idea to stop taking that cold turkey in the middle of a very stressful event?” Drumm asked.

He suggests developing a plan to wean someone off their medication over a 30- to 90-day period.

“This is probably the most important thing for planning for austere medicine scenarios,” he said.

The “A” represents analgesia, alimentary, and associated problems.

Have a plan for pain control, Drumm suggests, but that can be challenging.

Alimentary refers to nutrition and digestion.

“Far more people in Haiti died from cholera than from the big earthquake.”

Finally, the “N” represents nutrition, night-night (everyone has to sleep), and no-go.

Nutrition is the caloric intake a person needs to survive and thrive. A patient with burns to 40 percent of their body surface area requires 10,000 calories in a 24-hour period, Drumm said.

And “no-go” is the decision to stop care and let someone die.

“It’s a real consideration with medical planning. Understand that people die, people will get sick, and they will get injured with things that you will not fix,” Drumm said.

“You will not fix everything. We are humans. But you can do some stuff to get prepared now that will make any sort of crisis much easier to manage.”