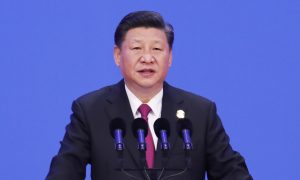 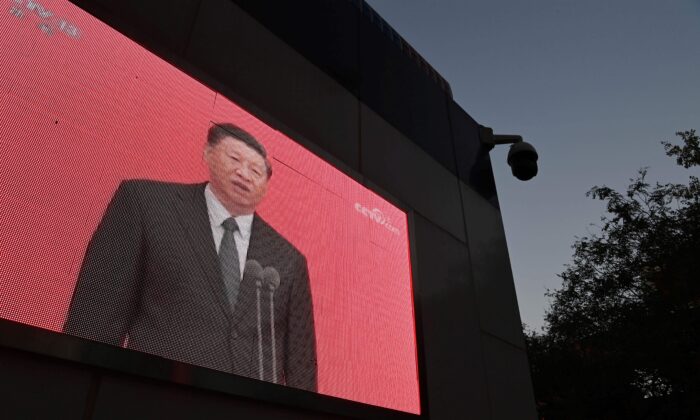 A video clip of Chinese Leader Xi Jinping is seen on the outside of a police patrol station in Beijing on Nov. 2, 2020. (Photo by GREG BAKER / AFP via Getty Images)
Chinese Regime

Xi Jinping, the general secretary of the Chinese Communist Party (CCP) and leader of the country, is facing a general election next year. To ensure his re-election, he has substantially changed the party’s rules and regulations. China commentators say it’s a sign of the CCP’s deepening autocracy and of Xi’s return to Mao rule.

Preparations began in February for the 20th CCP Congress in the autumn of 2022 that involves a senior leadership transition. The Regulations on the Protection of the Rights of CCP Members––called the “CCP’s gang rules” by the public––issued by the CCP Central Committee on Jan. 4, are seen as vastly different from the revised 2004 version and the original 1994 version.

In terms of length and content, the new edition has eight chapters and 52 articles, far exceeding the five chapters and 38 articles of the 2004 revised edition, and the six chapters and 35 articles of the original trial edition in 1994. But most notably, the “original legislative intent” of the new version is quite different from the 2004 and 1994 versions.

Upholding the Leadership of the Party

The 1994 trial version explained that the law was enacted “to promote intra-party democracy, improve intra-party life, and guarantee the normal exercise of, and inviolability of, the rights of party members.”

Strengthening Autocracy in Times of Chaos

A Chinese historian and online writer who asked not to be named, told The Epoch Times that the move by Xi is “a signal that the party is strengthening autocracy and dictatorship.” Xi is returning to Mao’s fascism, and democracy is only mentioned briefly.

“The CCP is in its last throes, and China is now in a state of complete chaos,” the historian said.

Many people in the party are very unhappy with Xi’s dominance, he said. Two second generation top CCP officials, Ren Zhiqiang and Cai Xia, even publicly criticized Xi, which seems to have scared Xi.

In September 2020, Ren Zhiqiang, a former Chinese real estate tycoon, was sentenced to 18 years in prison on “economic” charges, though the real reason for his sentencing is believed to be his being an outspoken critic of Xi Jinping. Cai Xia, a former professor at the Party School of the CCP Central Committee, who publicly defended Ren, was expelled from the party and had her retirement revoked. She also called the CCP a “political zombie” and suggested that Xi is a “Mafia boss.” She now lives in exile in the United States.

Chinese current affairs commentator Hua Po told The Epoch Times, “The CCP claims democratic centralism, but the newly revised rules emphasize obedience, centralism, and downplay democracy. That is, once the revised rules are passed, party members must unconditionally submit to it, and there must be no resistance or opposition to the party’s decision. Xi Jinping put emphasis on politics when discussing party organization building. It is more like building a military.”

In addition to changing its “gang rules,” the CCP also revised the Grassroot-Level Organization Work Regulations of the Institutions of Higher Learning recently. The revised version emphasizes the implementation of “Socialist Thought with Chinese Characteristics in Xi Jinping’s New Era” and the adherence to, and strengthening of, the CCP’s overall leadership over colleges and universities.

The CCP ostensibly follows Lenin’s “democratic centralism,” which claims to combine “centralism on the basis of democracy with democracy under centralized guidance.” In fact, Mao’s era was marked by a personality cult and centralization of power, as well as violent political movements such as the suppression of counter-revolutionaries, the Great Leap Forward, the anti-rightist movement, and the Cultural Revolution. All-in-all they resulted in the unnatural deaths of at least 80 million Chinese.

The Regulations on the Protection of the Rights of CCP Members, introduced by Deng Xiaoping to save the CCP from extinction, were tried out in 1994. Deng’s actions calmed down party members and the general public to some extent and thus triggered demands for democracy among Chinese people. However, the “June 4” student movement in 1989 gave the CCP a crisis of power, so Deng and the CCP used force to suppress it, creating the Tiananmen Square Massacre and shocking the world.

After winning popularity with his anti-corruption campaign in the early days of his leadership, Xi returned to Mao’s line in 2015, including a personality cult, and drew intra-party criticism for amending China’s constitution in 2018 to remove presidential term limits.

Nakazawa Katsuji, an editorial writer at Japan’s Nikkei newspaper, shared a similar view in a recent analysis. He commented on an unusual move by Chinese authorities in April, when Zhuang Rongwen, the deputy chief of the party’s propaganda department, said the party had accomplished “great achievements” between 1949 and 1976.

Mao’s Cultural Revolution began in 1966, and was brought to an end by Deng in 1976 as “a grave mistake” in the CCP’s history. Zhuang’s statement of “great achievements” is the first time Chinese authorities have openly made affirmative remarks on the Cultural Revolution.

According to Katsuji, Zhuang’s remark must have been approved by Xi, and it is tantamount to an official acknowledgment of the Cultural Revolution and a denial of Deng’s opening-up and reform policy.

Xi did so because he must overturn Deng’s paramount authority in the Party as he seeks to further consolidate his powers and secure a third five-year term as China’s president next year, Katsuji said. Denial of Deng makes it possible to abolish key policies laid down by Deng, including the collective leadership system and in-party rules that limit China’s top leader from sitting in the position for more than 10 years, he said.

According to insider information obtained by The Epoch Times in December 2020, CCP patriarchs harshly criticised Xi for abandoning Deng Xiaoping’s policies of “reform and opening-up” and “hiding one’s light under a bushel,” while adopting an authoritarian policy of “repression at home and expansion abroad” instead. According to the sources, his critics even forced him out of his office at one point.