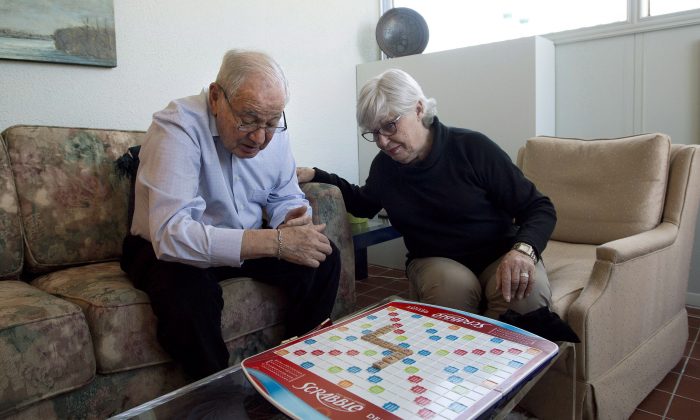 "The evidence for non-pharmaceutical approaches to the behavior problems often seen in dementia is better than the evidence for antipsychotics, and far better than for other classes of medication," says Helen C. Kales. (The Canadian Press/Nathan Denette)
Canada

The number of people suffering from dementia will triple by 2050 and many governments, including that of Canada, are “woefully unprepared” for the coming epidemic, says a new report.

Released by Alzheimer’s Disease International (ADI), the report suggests the disease is increasing faster than previously estimated, rising from 44 million this year to 135 million worldwide by 2050.

Concern over the looming epidemic is such that the first-ever summit on dementia was held in London, U.K., on Wednesday.

Dementia currently affects nearly 15 percent of Canadians 65 and older—close to 750,000 people, according to the Alzheimer Society of Canada. A national dementia plan is urgently needed to tackle the growing problem, says CEO Mimi Lowi-Young.

“We’ve got bits and pieces of a plan, but it really needs to be brought together in a more integrated and coordinated way, with greater commitment [from the federal government],” she says, adding that 13 other countries already have a plan in place.

The Alzheimer Society is urging the government to bring together a partnership of experts, government officials, health-care providers, researchers, and Canadians impacted by the disease in order to initiate a comprehensive strategy.

The Canadian Medical Association and the NDP are also calling for a pan-Canadian plan.

NDP MP Claude Gravelle has been urging the government to back his bill, C-356, which aims to establish a national dementia plan, since he introduced it in 2011. Gravelle’s mother suffered from Alzheimer’s disease before her death in 2003.

The absence of coordinated public policy around dementia renders governments vulnerable and unprepared for the increasing epidemic, the ADI report said.

The Cost of Dementia

The 24-hour care the disease often demands makes it an enormous burden on taxpayers. The Alzheimer Society estimates that the current cost to the Canadian economy of $33 billion annually will rise to $293 billion in direct (medical) and indirect (lost earnings) costs by 2040.

“When we talk about the expense or the impact of the disease, it’s not only on the individual with the disease, but it’s their family who has to take time away from work to actually be able to care for their family members,” says Lowi-Young.

“So not only does it impact the health care system, but also the social fabric and the economy of the country.”

Adding to the cost is the shortage of long-term care beds for dementia patients as well as properly trained caregivers to look after them—particularly those with the most severe form of the disease—with the result that many seniors with dementia are spending the latter part of their lives in acute care hospitals.

Lowi-Young and other Canadian delegates, including Health Minister Rona Ambrose, attended the first G8 Dementia Summit in London on Wednesday. The aim of the summit was to identify and agree on a new international approach to dementia research and policy.

The Public Health Agency of Canada would not confirm whether a national plan is in the works, but media relations adviser Stéphane Shank says Canada has been a world leader in dementia research and is working with domestic and international partners on dementia-related initiatives.

Between 2006 and 2013, the government invested over $860 million in neuroscience research, including over $236 million directed to Alzheimer’s disease and related dementias, notes Shank.

A portion of that went toward establishing the Canada Brain Research Fund in 2011, which will fund research on the prevention of Alzheimer’s disease.

“This will be one of the largest investments in interventions for prevention of Alzheimer’s ever made in this country and sets forth a challenge to fast-track a quantum leap in the field,” Shank says.

Dementia is an umbrella term for a variety of brain disorders. Symptoms include loss of memory, loss of judgment and reasoning ability, and changes in mood and behaviour. Alzheimer’s disease is the most common form of dementia.

According to a 2011 survey conducted for the Alzheimer’s Society, many Canadian baby boomers remain unaware of the early signs of Alzheimer’s disease, even though their risk of developing it doubles every five years after age 65.

Of those surveyed, 50 percent identified memory loss as a key symptom, but failed to mention other critical signs such as difficulty with day-to-day tasks, changes in mood and personality, disorientation, language problems, or prolonged apathy.

The tragedy and confusion of the disease was highlighted last month when 72-year-old Alzheimer’s patient Ronald Westbrook was fatally shot 5 km from his Atlanta home after being mistaken for an intruder while trying to enter a stranger’s home in the middle of the night.

In August, an incident in Ontario sparked outrage when 80-year-old dementia patient Iole Pasquale was tasered by police after she wandered from her Mississagua home in the night holding a knife. Pasquale’s hip was broken during the incident.