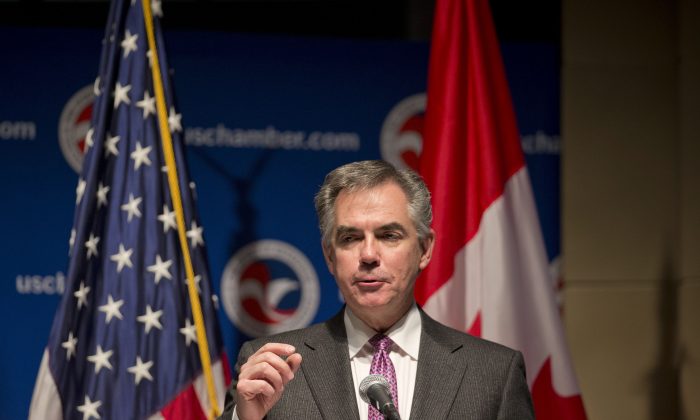 Alberta Premier Jim Prentice gives a keynote speech at the US Chamber of Commerce in Washington on Feb. 4, 2015. He addressed the main criticisms lobbed at the oilsands during the Keystone XL debate. (AP Photo/Pablo Martinez Monsivais)
Canada

Prentice Seeks to Soothe a Bruised Oilsands Reputation in Washington

WASHINGTON—Like a mobile medic, the premier of Alberta is on the road this week applying a little balm to the bruises his province’s oil industry has been taking in the United States.

He addressed three sources of those aches during a speech to a business crowd on Wednesday, as he ended a visit to Washington and headed to New York.

Prentice didn’t dwell on plunging oil prices—aside from joking that he checks them first thing in the morning, while his finance minister doesn’t sleep at all.

He lingered on two other areas: the environment and the economy. In a speech to the U.S. Chamber of Commerce, Prentice addressed the main criticisms lobbed at the oilsands during the Keystone XL debate.

He did it without mentioning the most famous source of that criticism, who lives in the White House, just across the street from where he was speaking.

The premier attacked the economic logic espoused by the president, who suggests that Keystone XL will do nothing for Americans and simply pump Canadian oil abroad.

Prentice rattled off statistics about America’s involvement in the oilsands: 1,900 U.S. companies in the supply chain, a 90-cent return to the U.S. economy for every dollar spent on Canadian oil, financing from New York, oil imports from Alberta twice as high as Saudi Arabia.

He then spent almost half his speech on the environment, addressing Alberta’s dirty-oil reputation. He listed climate-change initiatives in Alberta—a carbon fund, environmental research, public transit and about $300 per capita spent on carbon-capture technology.

He questioned why environmentalists go after Alberta and not other heavy-crude producers such as Venezuela and Nigeria.

“In some U.S. jurisdictions, we’re seeing specific policy proposals that are designed to exclude Canadian oil from the U.S. market while giving a free pass to comparable oils from other countries,” he said.

The challenges of rebranding Alberta oil are evident in the U.S. capital.

A federal agency undermined Keystone during Prentice’s visit. The Environmental Protection Agency questioned, in a letter, whether analysts at the State Department had understated the emissions from the project by basing their estimate on high oil prices.

American lawmakers, meanwhile, get analysis from the Congressional Research Service, which in a report last year said the well-to-wheels greenhouse gas emissions from Canadian oilsands are two to 18 percent higher than from their Venezuelan rival.

Canadian federal stats aren’t all helpful, either: Environment Canada figures show that, in 2012, Alberta GHG emissions had risen seven per cent from 2005 and 47 per cent from 1990.

But Prentice says he’s eager to negotiate harmonized industrial emissions for North America. He said that would be better than an ad-hoc approach, under ill-informed prejudices.

“And we have for a long time been leaders in taking action.”