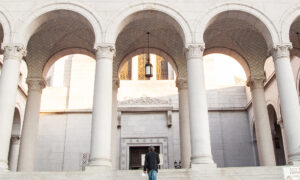 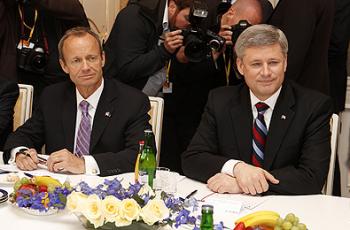 International Trade Minister Stockwell Day and Prime Minister Stephen Harper at the Canada-EU Summit in May 2009 in Prague, Czech Republic, where leaders agreed to launch negotiations toward a Canada-EU comprehensive economic partnership agreement. (Government of Canada)
US

As the premiers gather in Regina from August 5 to 7 for their Council of the Federation summer meeting, a business coalition is urging them to act faster to cut longstanding barriers to interprovincial trade.

The coalition says this would facilitate Canada’s negotiations with the European Union toward a comprehensive economic and trade agreement, the first round of which will take place in October 2009.

“To the extent that we can eliminate these barriers within Canada, we are at a stronger position at the negotiating table to achieve improved access for Canadians [in European markets],” said Ross Laver, vice president of policy and communications of the Canadian Council of Chief Executives, part of the eight-member coalition.

“If we don’t have these issues settled domestically, it’s going to be more difficult to make progress in negotiating with other countries and regions.”

Among the key internal barriers in Canada are policies and regulations that hinder interprovincial trade in goods and those that make it difficult for workers to move between provinces and have their credentials recognized.

Many areas, including the environment, food and agriculture, securities, and government procurement, are regulated by the provinces and territories.

And changes in labour mobility require working with the many self-regulating associations in the jurisdictions that govern numerous professions and trades affecting everyone from lawyers, doctors, nurses, and teachers to welders, mechanics, and construction workers.

“In many areas regulated at the provincial level in Canada, the federal government on its own would not have ability to commit Canada to any particular undertaking,” Mr. Laver said.

The provinces and territories need to harmonize their policies, regulations, and standards. However, the challenge is that barriers to interprovincial trade and labour mobility are a highly complex issue that involves many details, technicalities, vested interests, and numerous players.

Domestic trade barriers have been an issue in Canada for decades. Various initiatives have tried to resolve them but none have been completely effective.

The Interprovincial Standards Red Seal Program was established over 45 years ago to help address labour mobility for skilled tradespeople.

Then the 1995 Agreement on Internal Trade (AIT), signed by all the provinces and territories, came into effect aiming to reduce barriers to the movement of goods, services, investment, and labour.

Under the AIT, provincial governments have access to a dispute settlement mechanism but “it’s not enforceable, it’s costly, it’s inaccessible,” said Carole Presseault, vice president of government and regulatory affairs at the Certified General Accountants Association of Canada (CGA-Canada), another coalition member.

She said CGA-Canada has had two rulings in its favour, one against Ontario and another against Quebec, that these two provinces have still not implemented after six or seven years.

These rulings required them to lift restrictions on CGAs so that they may practise public accounting in Quebec and Ontario as they do in other provinces.

In addition, only governments can access the AIT’s dispute settlement mechanism, not consumers or companies.

Yet “at the end of the day it is individuals and businesses that are affected by these barriers,” Ms. Presseault said.

In 2006 British Columbia and Alberta signed the Trade, Investment and Labour Mobility Agreement (TILMA) which many observers view as a much better model than the AIT due to its monetary penalties for dispute resolution, among other provisions.

But a “workable agreement” is needed between all the provinces as well as the federal government, said Ms. Presseault.

Nevertheless, TILMA has prompted some accelerated work on the AIT, including a pledge by the premiers last year to amend it to achieve full labour mobility by early 2009.

These new rules have yet to take effect, however, as two jurisdictions still haven’t ratified and several provinces are now seeking exemptions from them.

The Standing Senate Committee on Banking, Trade and Commerce conducted a study between June 2006 and March 2008 on Canada’s internal trade barriers.

In his testimony, Paul Jenkins, Senior Deputy Governor of the Bank of Canada, called this issue “a shared responsibility among companies, workers, and policymakers.”

Ms. Presseault, also a witness, noted the cost of lost opportunity. She said the Canadian economy is largely dependent on small- and medium-size businesses which “are not going to spend much time fighting barriers. They’re going to go to places where there are no barriers.”

Another aspect is a perception on the world stage that Canada is rife with internal trade barriers, which affects how international investors regard our country, said another witness, Kathleen Macmillan, president of International Trade Policy Consultants and co-author of a 2007 C.D. Howe Institute background paper on this topic.

The Organisation for Economic Co-operation and Development and the International Monetary Fund have both highlighted these barriers as important issues for Canada to address, she said.

Canada’s Constitution broadly provides for federal powers to regulate trade and commerce. In April 2008 the business coalition made several proposals for the federal government to exercise its role.

One was to establish federal legislation “to ensure a free and open market, without discriminatory practices.” Another was to create a standing internal trade tribunal accessible to all Canadians.

Asked for their response to these proposals, Industry Canada in an email to The Epoch Times replied that “the federal government is exploring all options on how to remove internal trade barriers” while “working closely with the provinces and territories.”

“The federal government, along with the provincial and territorial governments, is implementing recent amendments to labour mobility and dispute resolution under the Agreement on Internal Trade (AIT). Work is also continuing to develop options on ways to further strengthen the AIT.”

EU As a Model

Mr. Laver said the EU, where 27 countries of varying sizes, populations, economic strengths, and levels of economic development have opened their national markets to free trade with one another, is a good model and has been “a positive for everybody.”

International Trade Minister Stockwell Day told The Epoch Times in an email that the provinces and territories’ involvement in the Canada-EU talks “will include extensive consultations and participation in the actual negotiations in areas that fall wholly or partially under their jurisdiction (e.g. sub-federal government procurement).”

Canada will “take time to consider the many interests involved and will not rush this process,” he said, adding that as the federal government works to remove trade barriers between Canada and other countries, “we would expect the provinces to be just as committed to removing obstacles to commerce here at home.”

Saskatchewan premier Brad Wall told the Globe and Mail on Tuesday that the provinces wish to move further in reducing internal trade barriers, which he said is important if Canada is to persuade the U.S. to drop its “Buy American” policies that bar Canadian firms from bidding on U.S. projects funded by President Barack Obama’s stimulus package.

“There are a lot of details to be worked out and we’d like to see some faster progress,” said Mr. Laver.