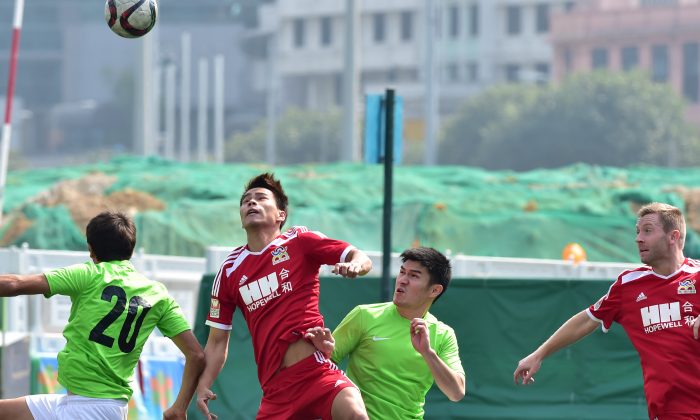 Southern and WanChai players contest the ball during their HKFA league one match at Happy Valley-6 on Sunday Feb 8, 2015. Southern went on to win the match 4-2. (Bill Cox/Epoch Times)
HK Football

The weekend started with a Friday night (Feb 6, 2015) match between Kitchee and Wong Tai Sin at Mongkok Stadium, where the game was settled with a 15th minute goal from Xu Deshuai finishing from Huang Yang’s through ball. Kitchee could have made their win more emphatic in the second half, but Rubiato Martinez failed to score from a 67th minute penalty.

On Saturday (Feb 7) South China were held to a scoreless draw by Wofoo Tai Po in the game at Hong Kong Stadium, whilst YFCMD defeated BC Rangers 2-nil at Kowloon Bay Park, the game being settled after a scoreless first half, through a Kenji Fukuda strike in the 67th minute, and Fernando Pedreira added a second in the 74th minute after receiving a pass from Lee Ka-yiu.

Sun Pegasus settled the game, and took the points, in time added on, when Festus Baise headed in Landon Ling’s cross.

Wing Yee now head the second division after 13 matches with 37 points, Mutual are second with 27 points, Kowloon City are third with 25 points, and Sai Kung fourth with 25 points.

Tung Sing now lead the division with 38 points, with Central & Western district second with 35 points both from 15 matches.