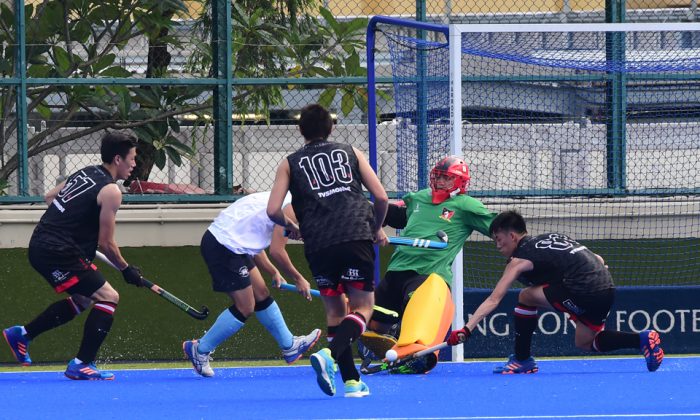 Valley-A are forced to defend in their HKHA Premier League match at HKFC on Sunday Oct 8. After a hard fought match HKFC came away 4-0 winners. (Bill Cox/Epoch Times)
International

Premier Champions Still Have What It Takes

Field Hockey—HKHA Premiership
By Eddie So

HONG KONG—Five-times Premier League Champions Khalsa-A started off slowly but went on to take maximum points up against a spirted Shaheen-A side who had to rely on a few B-team players called up to help them make up a full side.

Shaheen-A captain Chris Tso complimented his side on their resilience against their opponents who outmanned them both in player skills and experience but despite that, it was a much improved Shaheen-A side as they battled on in a David versus Goliath match with Khalsa’s non-stop runs on either side of the field.

“Our boys did well but we have our work cut out ahead as we lack cohesion as our fitness showed too and it led to us making a few unnecessary errors which would have showed a different score-line,” he said. “We need to figure out ways to strengthen our weaknesses especially in defense as we allowed our opponents too many gaps inside our circle.”

He added they had player shortage issue too as some have left to join other clubs, something normal at the start of each season for every club.

“We had to call up a few of our B team players and they were not used to playing at the pace of the Premiership and it was definitely hard on them and for that I felt they did really well,” he added.

Otherwise, Tso thought his side had done well against a side that have won the Premiership back to back these past two seasons alone and are gunning for a sixth title and have a cache of talent within the team.

Khalsa-A had their issues to resolve with their captain Ahmad Muhammad playing in his first competitive game as he dealt with jetlag after returning from his younger brother’s wedding.

It was slightly obvious as Khalsa-A were also struggling at times as they got down to adapt training into a cohesive playing formation plus losing four players from the last two seasons including highly talented midfielder Dev Dillon who now ply’s his trade for Hong Kong Football Club-A.

“We had a hard game today. It may not seem like that when you see the score-line but it was hard never-the-less as we have done our training but we lack the finesse and missed many chances to convert chances into goals,” he said.

This being early days of the Premiership there are other sides hoping to lift the title at the end of the season. SSSC-A proved too strong for KCC-A as they ran riot with a 9-1 result and KNS-A kept themselves in the top echelon with a 7-0 win over HKCC-A.

HKFC-A, 3 points adrift of the top after losing to SSSC in the first match of the campaign, walked off their home pitch with a 4-0 victory over Valley-A after a very tough, even, competitive battle for much of the match. Earlier at the same venue, HKFC-B tore apart Pakistan-A 7-1.