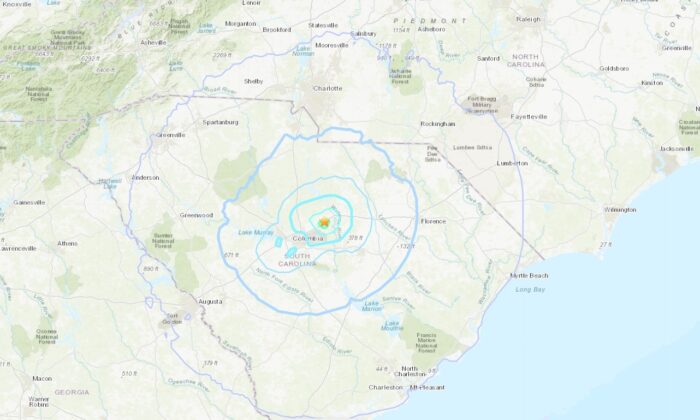 A map showing the location of a magnitude 3.29 earthquake near S.C. on May 9, 2022. (Google Maps/Screenshot via NTD)
US News

There were no immediate reports of any damages or injuries, although more than 4,000 people contacted the U.S. Geological Survey to report what they felt.

The pre-dawn temblor lasted only seconds, but a number of people took to social media to describe being shaken from sleep when the quake hit shortly after 1:30 a.m.

There have been dozens of low-magnitude quakes since last December, when a 3.3 magnitude tremor originated in the same area, near Elgin, about 21 miles (34 kilometers) northeast of downtown Columbia, South Carolina’s capital city.

Those awakened early Monday reported feeling the earth shaking for several seconds, some even describing what sounded like a heavy truck moving nearby.

But geological officials noted that, while the events are unsettling, central South Carolina’s loose soil and lack of significant bedrock — coupled with the Monday earthquake’s shallow depth of about 1.9 miles (3.1 kilometers) below the earth’s surface — mean such rumbles are felt more significantly in a place like South Carolina than they would perhaps be along the San Andreas fault system, in California.

“There’s definitely been a ‘swarm’ here over the past several months,” Amy Vaughan, a geophysicist and seismic analyst monitoring the quake for USGS’ National Earthquake Information Center in Colorado, told The Associated Press by phone. “This is not an area that is capable of producing what we would consider a big one, of much larger magnitudes. … A 3.3 is a larger deal when it occurs somewhere like South Carolina.”

Noting that the 3.3 magnitude is an early assessment and could change, Vaughan added that reports had been pouring in to the 24-hour quake monitoring center.

“I have not heard of any damage reports so far but have had over a thousand … reports,” she said.

Still, she called it “alarming for sure” and said some lesser aftershocks were possible in coming days or weeks. She noted there were quakes of a preliminary 2.0 or higher in April and March and others in the region — and .

South Carolina typically averages 20 earthquakes a year, according to the South Carolina Emergency Management Division. Elgin is along a large fault system that extends from Georgia through the Carolinas and into Virginia.

Last year, the area near Jenkinsville — about 40 miles (60 kilometers) west of this group of tremors — registered six small earthquakes in over a week.

According to emergency management officials, about 70% of South Carolina earthquakes are located in the Middleton Place-Summerville Seismic Zone, about 12.4 miles (20 kilometers) northwest of Charleston.

In 1886, that historic coastal city was home to the largest recorded earthquake in the history of the southeastern United States, according to seismic officials. The quake, thought to have had a magnitude of at least 7, left dozens of people dead and destroyed hundreds of buildings.

That event was preceded by a series of smaller tremors over several days, although it was not known that the foreshocks were necessarily leading up to something more catastrophic until after the major quake.