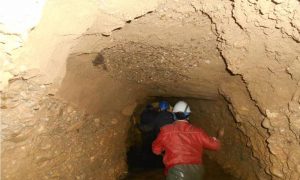 People are capable of committing unspeakably brutal acts, and based on a prehistoric mass grave uncovered by scientists, that’s been the reality for a very long time.

The site, dating between about 5200 and 4850 BC was discovered near what is now Frankfurt, Germany. Excavations yielded the remains of 26 Neolithic individuals who appear to have been tortured and killed.

Among them, adults and children were represented in equal proportions. The implement used to take their lives is believed to be a tool widely used  at the time. Also observed was that the victims’ lower legs were broken, possibly in attempt to keep them from running to safety.

Notably, there were no teenagers found, suggesting that they either did manage to escape or were abducted by the invaders. Why the conflict broke out is unclear, but it probably had something to do with drought, unsuccessful farming, and food shortages.

While hunters and gatherers typically just moved elsewhere when resources became scarce or the neighbors turned violent, the more settled people of the time were often reluctant to relocate.

Further theorized is that killers believed their victims had a hand in the crop failures, possibly through witchcraft.