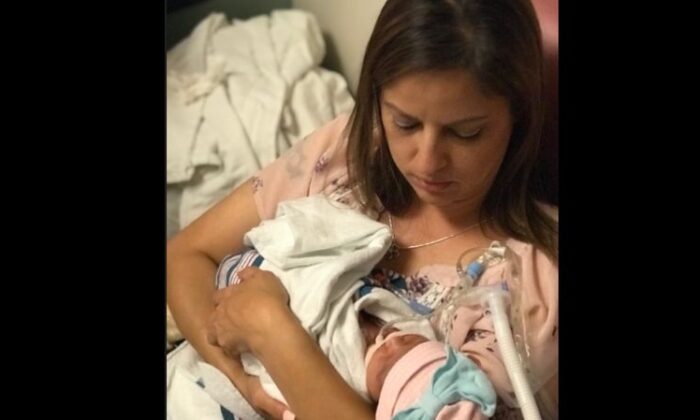 A pregnant woman who was shot in the stomach by burglars in her Austin, Texas home has spoken out about the tragedy of losing her unborn child.

Desire Guardiola was shot in the stomach on July 20 after a man invaded her family home, according to the Daily Mirror.

“As soon as I stepped foot out the apartment I started screaming for someone to help me that two people just broke into my apartment with a gun and knife and were taking my things!'”Guardiola told the Daily Mirror. “I continued to run and as I came around the corner I noticed the boyfriend was fighting for my stuff back in which he was somewhat successful and was able to grab a few things back.”

She added: “Still running I looked back to see if he was okay and then I heard a gunshot. I knew I had been hit because immediately I felt an intense pain spread throughout my stomach. I quickly covered where I felt blood escaping, the backside of my lower right abdomen.”

After being shot, the woman held the wound until paramedics arrived on the scene.

She ended up delivering her daughter, named Emery Skye, via C-section after she was taken to the hospital. Tragically, the child was declared brain dead eight days later.

“Right after the noise of the gunshot I could no longer feel Emery kicking in my stomach and I knew something was wrong,” Guardiola continued. “In the EMS ride they tried to detect her heartbeat in which they soon found out wasn’t there. They called for an emergency c section an anesthetist.”

A GoFundMe was set up for the family.

According to the Mirror, the child was born brain-dead but battled eight days before dying.

CBS Austin reported that Andrew Nino and Kiara Paz, both 18, along with 29-year-old Alyssa Vega, were charged with first-degree felony aggravated robbery with a deadly weapon.

Police said that a male with a gun and female with a knife kicked in their door at around 9 p.m.

The boyfriend said Nino took his prescription pills, and Paz took his Xbox and other items.

Police said the boyfriend didn’t believe the gun was real, and he grabbed a knife and chased after them, tackling Paz, the CBS affiliate reported.

Nino then pointed his gun at Paz and later shot Guardiola, the report said.

“Still running I looked back to see if he was okay and then I heard a gunshot,” she told the Mirror. “I knew I had been hit because immediately I felt an intense pain spread throughout my stomach. I quickly covered where I felt blood escaping, the backside of my lower right abdomen.”

Later, at the hospital, ” I asked for a baptism for Emery. They didn’t expect her to live past that night and I wanted to make sure she would be baptized and saved to go to Heaven if she passed. The ceremony was beautiful. I prayed that night before I went to bed, praying for a miracle and for God to give her and I strength to pull through the night, and we did,” she recalled.

She issued a longer statement to the news outlet:

“Thankfully I had the support of my family and her fathers family as well. They helped us through this whole experience and continue to do so.

“My mother and grandmother helped arrange the funeral which was soooo beautiful and yet so heart wrenching to have to let her go and bury her. She was seriously loved and it showed during her fight and after she let go and went back home to God.

“I’m forever thankful for the family he has blessed me with and for allowing me to become closer with Emery’s Father’s family as well. Although we regret having to grow closer due to tragedy we have been blessed to have the love and support of one another to help us grief and move forward in our every day lives.

“I trust that my baby girl is now in paradise with God being allowed to do things she wouldn’t have been able to here on Earth after the shooting. With that I have peace and never once would I have thought something so tragic would happen to me and especially with my first pregnancy of my first baby girl.”