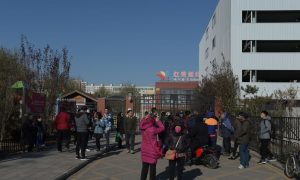 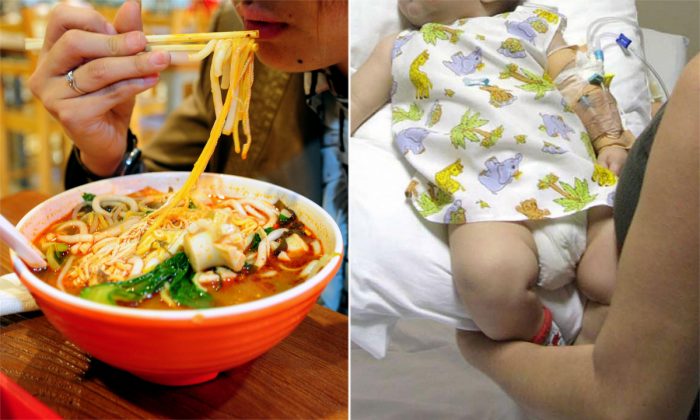 A woman tossed a bowl of scalding soup onto an 11-month-old girl for making a lot of noise at a restaurant, and was later fined and sentenced to detention by the police, according to the Dahe Daily.

The infant girl suffered burns on her back and buttocks, and is receiving treatment at local hospitals in Zhoukou City, Henan Province, China.

On June 11, the mother, surnamed Yang, 29, took her daughter to a Malatang, a build-your-own soup style of restaurant found throughout China.

The pregnant woman, surnamed Ren, 28, poured the hot soup on Yang and her daughter because the child was banging on the table with a spoon, according to an online statement from the Xiangcheng Public Security Bureau. Yang apparently did not stop her daughter’s behavior.

Ren paid for a portion of the medical bills. She was also fined 500 yuan ($70) by the police, and sentenced to 15 days in jail, deferred until after her pregnancy, according to the police report.

However, Chinese police may detain women regardless of pregnancy in certain situations.

Security footage of the incident was later shared on Weibo, China’s version of Twitter.

Around 6:40 in the evening, Yang arrived at the soup restaurant with her daughter. Ren was already at the restaurant.

“That pregnant woman [Ren] seemed to be arguing with her husband, and her mood was getting worse,” Yang told Dahe Daily. “We were sitting there, and heard her talking and swearing.”

Yang said she didn’t know who Ren was cursing at, and only that Ren seemed to often face the mother and daughter while doing so. Yang told Dahe Daily that she didn’t say anything to Ren.

However, Yang didn’t mention that she allowed her daughter to continuously bang on the table with a spoon, according to the Xiangcheng Police Report.

“Later, the woman’s husband suggested that they leave, and we didn’t think anything of it,” Yang told Dahe Daily. Ren and her husband left, but she came back in just moments later.

Then, as seen in the security video, the woman walked back in the restaurant, goes to the back and picks up a bowl of hot soup. She walks toward Yang and her child, and pours the bowl on the two, and quickly exits the shop.

People inside stood up to see what had happened, and tried to follow Ren, but she was already out of sight.

The Dahe Daily said that Ren’s husband, who was not named, stayed back at the restaurant until police arrived. Police issued a punishment to Ren of 500 yuan ($70) and 15 days in jail, but will allow her to carry out her sentence until after she gives birth.