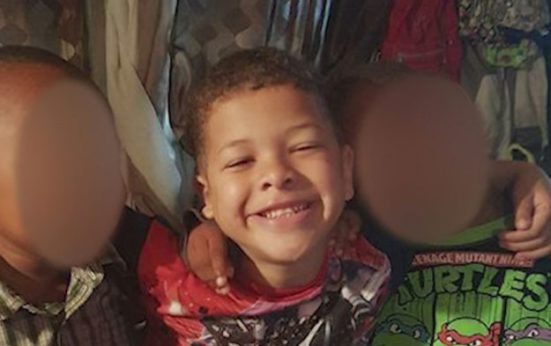 A pregnant Texas woman shot and killed a 7-year-old boy after arguing with his father over some stolen perfume, DFW reported, citing the boy’s family.

Brooke Craig was fighting with 24-year-old Cameron Castillo, the father of the boy killed. Castillo got into the car and began to drive away with his three children inside.

This is when Craig, Castillo’s pregnant girlfriend, started shooting at the car intending to hit Castillo. Instead, she shot 7-year old Kaden Green in the chest.

But the bizarre episode didn’t end there. Castillo and Craig then proceeded to take the children out of the car, including Kamden, who was bleeding from the chest. The couple then left the children behind and drove off.

“I don’t care if you had a blue warrant, anything. That still was your baby. How could you leave him?” Kaden’s aunt, Felicia Spillman, told DFW.

“She tried to shoot Cameron, and she ended up shooting the baby in the chest,” said Spillman.

Craig is due to give birth next month, DFW reported citing a family source.

“I don’t honestly think she should be allowed to keep that one after taking one,” Evelyn Jose, Kaden’s second cousin, told DFW.

Police caught up with the couple 30 miles away. The duo led the cops on a chase which ended after Craig rammed police cars.

Castillo’s two other children have been placed into the care of Child Protective Services.

Police received a call before 5 p.m. on Thursday, Dec. 28, to a house on the 4200 block of Pickett Street but found no one at home upon arrival. The officers later learned that a child had been rushed to a hospital.

Castillo refused to accompany his child to the hospital because there was a warrant out to arrest him, according to Felicia Stillman, Kaden Green’s aunt, WFAA reported.

Craig and Castillo were booked into Collin County Jail. Craig is facing a capital murder charge, while Castillo is facing a charge for violating parole.

“All he wanted was to be like his daddy, and he wanted to be a Cowboys player. He was such a good kid. He didn’t deserve this. He was a great kid, and I would give anything to have him back, I’d give anything,” the mother cried.