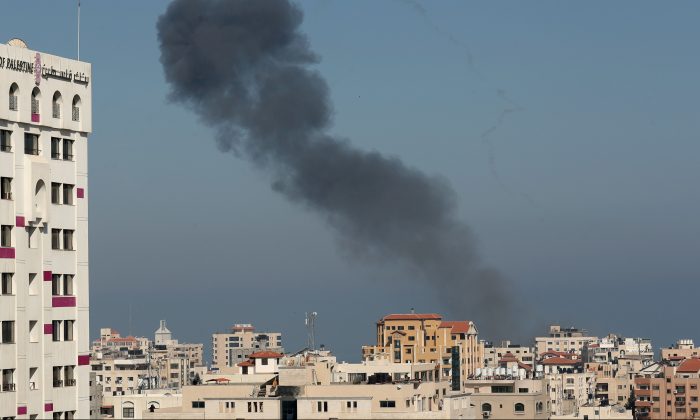 A pregnant Palestinian woman and one-year-old baby killed in Gaza died not from Israeli retaliatory air strikes, but from rockets misfired by jihadi terrorists, the Israeli military says.

The Independent cited Lieutenant Colonel Jonathan Conricus, a spokesman for the Israeli army, as saying the country’s intelligence services found the pregnant woman and baby had been killed by “Hamas fire.”

The Telegraph Middle East correspondent Raf Sanchez wrote on Twitter, “‘We can now confirm that they were killed by accident as a result of Hamas fire,’ an IDF spokesman says.”

NEW: Israeli military says the mother and baby killed in Gaza yesterday were killed by a misfired Palestinian rocket, not an Israeli air strike.

“We can now confirm that they were killed by accident as a result of Hamas fire,” an IDF spokesman says.

This contradicts earlier reports, such as by the British news service ITV, that the “baby girl and her pregnant mother were killed by Israeli airstrikes in Gaza.”

ITV cited Gaza’s Health Ministry, which identified the 14-month-old girl as Seba Abu Arar, and claimed she had been killed in an Israeli air strike.

Statements by the Israeli military that the mother and child were in fact killed by missiles misfired by Gaza-based terrorists are part of Israel’s efforts to counteract attempts by terror groups to shape the narrative with false claims.

Terrorist groups battling Israel, such as Hamas and Palestinian Islamic Jihad (PIJ), have been widely reported as using Palestinians civilians as human shields.

“Since the 2014 Gaza conflict, Hamas (has) used civilians as human shields for its own fighters. Similar tactics were successfully adopted by Hezbollah against Israel in their 2006 conflict,” Lt. Gen Richard Natonski, a retired U.S. Marine and member of the Hybrid Warfare Task Force at the Jewish Institute for National Security America (JINSA), told Fox News in a recent report. “The use of human shields in combat is contrary to Western thinking and the law of armed conflict. It’s hard to imagine how this wasn’t mentioned in the U.N. report, except for perhaps a certain bias by the authors of the report against Israel.”

Meanwhile, non-governmental organization U.N. Watch issued a statement on March 5 in response to a U.N. Commission of Inquiry report on the “human rights situation in Palestine and other occupied Arab territories,” which accuses Israel of “crimes against humanity” in respect to so-called “peaceful protesters” at the Gaza border.

“UN Watch rejects this biased report which gives a free pass to Hamas, and rewards its cynical use of civilians as human shields precisely in order to win political support from international bodies like the UNHRC,” UN Watch wrote.

“These blanket characterizations of the individuals on the Gaza side and of their intentions and actions are false, incomplete and misleading,” U.N. Watch wrote in a written statement submitted to the U.N. Secretary-General. “Hamas rules Gaza and played an essential role in overseeing and inciting the events, and in dispatching operatives under the guise of protests to engage in hostilities.”

The Israel Defense Forces shed further light on Hamas’s tactics in a recent tweet: “Wherever you are in the world, whether you are now going to sleep or just starting your day…you need to know that for the second day in a row, Israelis are waking up to rocket fire from Gaza.”

The post contains a clip with footage of rocket launches and strikes along with a message:

Wherever you are in the world, whether you are now going to sleep or just starting your day…you need to know that for the second day in a row, Israelis are waking up to rocket fire from Gaza. pic.twitter.com/8kxq0unhsZ

The IDF spokesman also said on Saturday that Israel was prepared to intensify its defensive actions. He added that PIJ was trying to destabilize the border, blaming Hamas for failing to rein it in.

In a joint statement on Saturday, Hamas and PIJ said, “Our response will be broader and more painful if the enemy pursues its aggression.”

Aerial exchanges have been frequent between Hamas and Israel over the past five years.

Israel’s Prime Minister Benjamin Netanyahu said he has ordered the military to continue “massive attacks” in Gaza in response to a terrorist missile barrage that killed one Israeli and wounded dozens.

Netanyahu was cited by the Times of Israel as saying that Hamas, the terrorist group he said was responsible for the over 450 rockets fired towards Israel over the last couple days, was paying a “very heavy price.”

The Times reported the prime minister spoke at a cabinet meeting at the Knesset, Israel’s parliament, on Sunday, saying he had ordered the army to “continue the massive attacks against terror targets in the Gaza Strip and boost the forces around Gaza with ground, armored and artillery forces.”

“Hamas bears responsibility not only for its attacks and actions, but also for the Islamic Jihad actions, and it is paying a very heavy price for it,” Netanyahu said.

Netanyahu also expressed condolences to the family of 58-year-old Moshe Agadi, identified as the first Israeli to be killed in the hostilities since 2014.

The Israeli military was cited by The Times as saying that in its response it had targeted operatives belonging to the Palestinian Islamic Jihad terrorist organizations.

“An IDF aircraft attacked members of the PIJ terror group who were in a munitions warehouse in the southern Strip,” the army said in a statement cited by The Times.

Earlier, the Israel Defense Forces posted a video on Twitter showing a building identified as a “Hamas HQ,” explaining, “In this building, Hamas used to order terror attacks and used to transfer money, supplies & logistics for the sake of killing Israelis.”

The IDF said they had destroyed the building.

In response to 250+ rockets fired from #Gaza at Israel, we struck a Hamas HQ. In this building, Hamas used to order terror attacks and used to transfer money, supplies & logistics for the sake of killing Israelis.

Emphasis on the “used to”. We destroyed it. pic.twitter.com/Bh2zhCGzCF

Earlier, air-raid sirens sent Israelis in the country’s south, near Gaza, running to their shelters through the night as interceptor missiles blew up rockets in the sky.

The latest round of violence began on Friday when a Palestinian Islamic Jihad sniper fired at Israeli troops, wounding two soldiers, according to the Israeli military.

200+ rockets rained down on the homes of Israeli families today. WATCH: pic.twitter.com/XZoqPabuQ6

Israel’s Foreign Ministry announced the casualty toll as follows: “A 58-year-year-old Israeli man was killed in the city of Ashkelon and dozens were wounded across southern Israel overnight, as a result of rockets that were fired into Israel by #Gaza terrorists.”

🔴A 58 year-old Israeli man was killed in the city of Ashkelon and dozens were wounded across southern Israel overnight, as a result of rockets that were fired into Israel by #Gaza terrorists. pic.twitter.com/rd1ydHwUE1

Israel retaliated with an air strike that killed two terrorists from Hamas, which controls Gaza.

Since Saturday, Hamas and PIJ terrorists fired more than 400 rockets at Israeli villages and cities, the military said, and Israel hit back with tank shelling and air strikes at some 200 targets in Gaza.

Israeli bombings in Gaza shook buildings and sent Palestinians fleeing for cover. The Palestinian Islamic Jihad terrorist group said two of its men were killed in an Israeli raid before dawn.

Gaza’s health ministry was cited by The Independent as saying seven Palestinians had been killed and 47 injured as a result of Israeli retaliatory strikes.